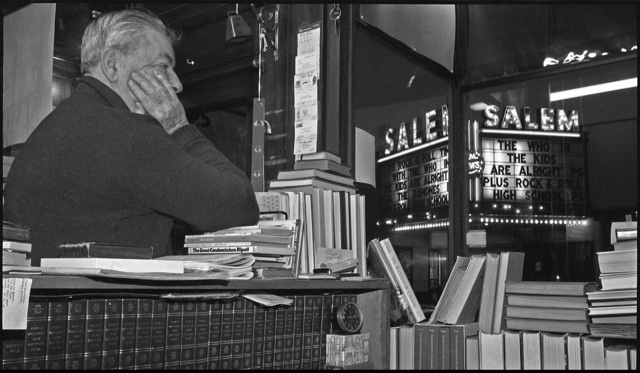 Located opposite the YMCA on the west end of Essex Street close to the intersection with Summer Street. E.M. Loew’s Salem Theatre opened in 1953. Its interior was modern. The walls were wallpapered, the ceiling was plain tile, and the aisles had carpet runners. All seating was orchestra, and because the the theatre was a single story, there was no balcony, or even a mezzanine at the rear. The seats moved forward slightly so the person could recline a bit. That was an innovation for its time. Otherwise, the theatre was nondescript. By 1983 it was being used for concerts. It was closed in 1985.

The building suffered a fire in the late-1980’s or early-1990’s and was razed. Condominiums now stand on the site.

A nice enough place to catch a double feature. Was usually second run with an older film on first. Would also get some first runs, usually the type you’d see on a TV ad with the announcer saying “At theaters and drive-ins near you.”

A neon bedecked rectangular marquee overhung the sidewalk with movie title on the side and and E.M.Loews neon emblem on the front-piece. A single ticket seller box was at the sidewalks edge. Around and behind the box was a wide tiled runway leading to the entrance.Posters for the current attractions (was always a double feature) were on the wall to the left and right of the boxoffice. Posters for the next attraction were in glass cases on the wall left and right of the main entrance doors. Entrance was via 2 glass doors on the right, part of a set of six doors that were the outer wall.A few steps inside was another set of glass doors and the space between the two sets was the smoking area. Lobby area was past the second set of doors. Candy counter on the right, bathrooms on the left.Only a half sized wall at the back of the auditorium so you could see the film running as soon as you were inside. Aisles on the right and left led down to the front screen. Screen was good size with a clock built onto the front wall to the left of the screen. Comfortable enough seats that reclined a bit.Double feature would have the main film go on last, usually a second run or a wide opening “B” picture.The first feature was often an interesting film from a year or so back.

I worked there in my younger days (early 80’s)as the fill-in projectionist on weekends or when the regular projectionist, Arthur Cornell, was ill or on vacation. The manager, Henry Goodman, was a former radio host who did his answering machine messages and preshow music in a radio show format. I would come in on Saturdays and Sundays for the matinee and start the preshow music at 12:00:00. His tape would end at 12:59:59. If I didn’t have the logo of the feature on screen at that time I would get “the phone call” from downstairs.

The projection booth had two mismatched Century C projectors, one of which had the wrong gate so it had to be threaded out of frame to start in frame, on top of RCA soundheads. Peerless Magnarc carbon arc lamphouses. I got my projectionist license in that booth.

We ran subrun double features. The joke was that you could guess this week’s co-feature by checking on what HBO was adding next week. It was more often than not, true.