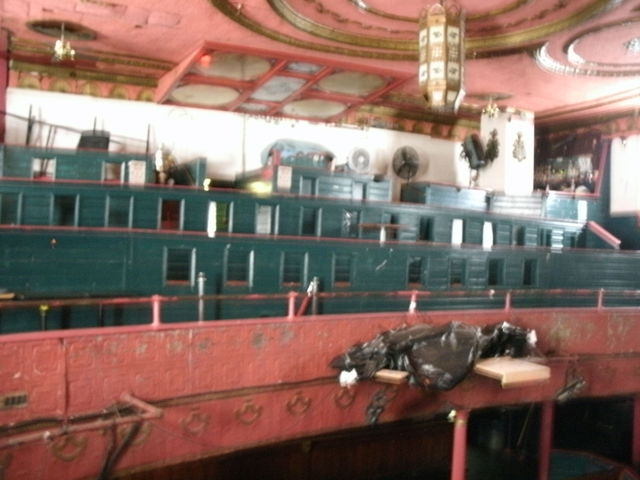 Located on Crannell Street, with another entrance on 69 Main Street (now demolished). The Dutchess Theatre opened on May 23, 1912, and was operated as a vaudeville/movie(photoplays) theatre. It was closed in 1945 and used for storage until 1970. Operated by Peter J. Tennis and his brothers, who also operated the Colonia Theatre in Norwich, NY.

for Heidi DD from two posts above:

How can we contact you?? I am the producer of a show that has been filming episodes at The Chance Theater in Poughkeepsie.

On Saturday 09/18/2010 a full crew of paranormal investigators spent 7 hours exploring The Chance. They found some incredible proof of “haunted” spirits. I’m talking A LOT of proof!!

We would love to speak with you and possibly include you as part of this… you have volumes of stuff? … perhaps you can help piece together the past with what the investigators found?

any help is welcome
thank you!!

To: IconGate – I emailed you today, if you don’t get it, please let me know. Heidi DD

To: Heidi DD – yes, received your email and did reply.

Hi Heidi DD, I am writing a book about Hudson Valley Legends and plan on including a chapter about the Old Dutchess Theatre. I would love to hear from you if you would like to share some of the information you have on its history. My email is listed below.

If anyone has any information about the Old Dutchess Theatre, or any other legends within the Hudson Valley, please contact me at

Shouldn’t this be listed as the Chance Theatre since that is its current name?

from old website: * The Dutchess Theatre – Opened: July 1912 * Carroll Players Play House re-opened on Monday, September 27, 1926, with “The Girl from Childs.” * Changed hands & name to The Playhouse Theatre on December 1928 – Vaudeville and Films * Opened as “The Community Theater” to entertain throughout the 1930s – Live Theater * Entertained as the “New Playhouse Theatre” on July 6, 1933 * Entertained as the “Astor Theater” during 1935 – Film * Entertained as “The Starlight Theater” during 1940 – Live Theater * Closed from 1945 through 1970 * Frivolous Sal’s Last Chance Saloon reopened in 1970 and entertained through 1980 – Food, Film and Live Entertainment including early tryout of Bill C. Davis' “Mass Appeal.” * “The Chance” takes the area by storm in 1980 through present – Live Shows

What a great theatre…I was there for a second time yesterday for Insane Clown Posse and covered in Faygo diet Root Beer.I had a feeling it was a movie theatre at some point.

This Facebook post has a photo gallery for this theater, including a view of the Astor Theatre with two 1946 releases advertised on the marquee, so it had to have been open past 1945. In fact, the Astor was advertised in the the October 21, 1950 issue of the Vassar Chronicle, so it continued in operation quite some time after 1945.

The page also claims that the house opened as the Astor Theatre in 1944. An article in the Vassar Chronicle of October 21, 1944 said that the Astor had been opened on July 14 by a Mr. Shanley, who was operating the theater as a revival house running films likely to appeal to Vassar students, while running action movies likely to appeal to children at weekend matinees. The 1950 advertisement showed that the Astor had daily changes of programs featuring older movies, so the policy must have continued.