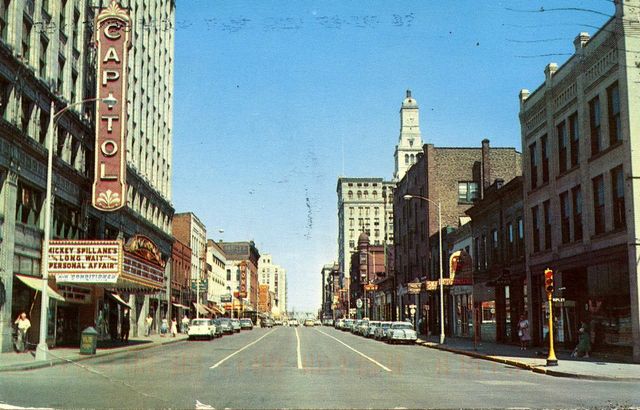 The Capitol Theatre, typical of most movie palaces, began life on December 25, 1920 with William Faversham in “The Man Who Lost Himself”. Operating as a mixed use vaudeville and movies theatre, it later began showing movies only.

On each side of the main floor auditorium, which originally seated 2,500, it featured alcoves containing a grand piano on one side and a harp on the other. It also had a working Wicks pipe organ, which was maintained by the Theatre Organ Society. One of the resident organists was Carol M. Allbee. On the walls in the lobby, foyer, and upstairs were paintings, which were retouched in the late-1960’s. By 1941 the Capitol Theatre was operated by Paramount Pictures Inc. through their subsidiary A.H. Blank.

Recently, Scott Community College was endowed with the building that includes the Capitol Theatre. It was used as a non-profit rental hall for concerts, theatre, lectures, etc., but was closed in the Fall of 2010.

Would anyone have a copy of the pictures that were hanging on the the walls, etc of the Capitol building. Send to me.

What kind of pleures hung on walls?

History of the Wicks organ at the Capitol added in Photos section. 1998 image & copy added courtesy of the Davenport Iowa History Facebook page.

Actually In 1973, The Capitol Still Ran American First-Run Films In English According To The Dispatch Of Moline, Illinois. At The Time, The Capitol In Davenport And The Parkway In Rock Island Both Played Showdown And The Reissue Of Walt Disney’s Mary Poppins At The Time. So I’m Not Sure If The Capitol Ran Spanish Films For A Very Short Amount Of Time Or Maybe They Started Running Spanish Films By The Mid-1970s.

I Will Find It Out Later On…

According To The Quad City Times, The Capitol Became A Triple-X Rated Theater On May 18, 1978.