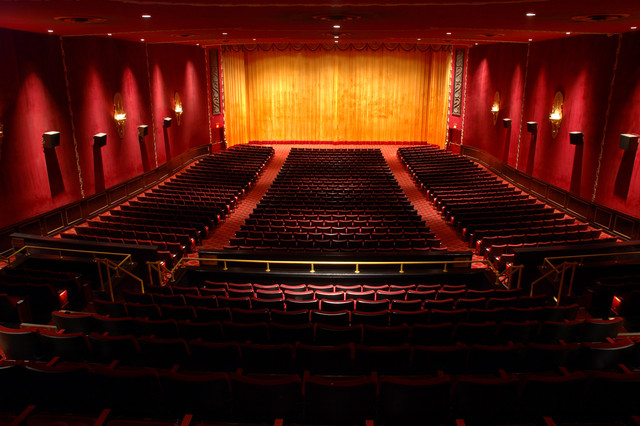 Built just a few hundred feet from the site of original Ziegfeld Theatre (demolished in 1966), this ‘new’ Ziegfeld Theatre opened December 17, 1969 with a gala premiere of “Marooned” starring Gregory Peck. The movie house was one of the last big palaces built in the United States.

It was built from plans by the architectural firm of Emery Roth & Sons, with designs by Irving Gershon and interior design by John McNamara. The Ziegfeld Theatre was built for Walter Reade for his chain’s flagship, and was later operated by Cineplex Odeon from 1987, Clearview from 1998, and Bow Tie from June 2013.

The letter ‘Z’ appears on the door handles and in the terrazzo floor of the ticket lobby. The main lobby has an elephant sculpture, also some memorabilia of the prior Ziegfeld Theatre and of the Ziegfeld girls, a ticket taker who cheerily welcomes customers. There is a grand stairs of marble and ornate metalwork, and an escalator. Upstairs is a foyer panelled in wood in which displays busts of Florenz Ziegfeld and Fanny Brice. “Story of this Wood” plaques in the lobby and upstairs state that the wood changed colors from oak to rich charcoal by virtue of being in a peat bog for 4,000 years outside Cambridge, England. Doors lead to the concessions foyer which has elegant restrooms, a huge framed poster from the movie “My Fair Lady” since Clearview placed it there, a bust of Will Rogers, and the entryways to the auditorium.

The auditorium features 1,131 seats: 825 seats in the front section, 306 seats in the raised stadium section at the rear. There are two sets of curtains over the screen, one gold, the other closer to the screen is a sheer white curtain. The huge screen measures 52ft x 22.7ft. The Ziegfeld Theatre’s interior is decorated with sumptuous red carpeting, abundant gold trim, crystal chandeliers, and ornamentation that ranges from sconces to door handles and exit signs.

I have the hardcovers of Ben-Hur, The Wonderful World of the Brothers Grimm and My Fair Lady.

to Bill H.- thanks for your reply. I was just wondering if you’ve ever come across any movie souvenir programs that were hardcover other than the 14 I mentioned.

Hi Bigjoe. Unfortunately I never did.

do you ever get a message in your inbox that says “someone has responded to your comment” but when you click on the link there are no new replies?

Hey Bigjoe… Happens all the time. And when it does, it typically means some spam account posted some nonsense comment on the page, just trying to bait people, and the administrator quickly removed it.

to Ed S.- thanks for your reply. it happens ever so often and I have always wondered why it occurs.

Thanks, guys. It happened to me today. The Ziegfeld page used to be so popular, but now …

Possibly because CT is still considered “Not Secure,” despite longtime promises by management to remedy that.

Can anybody state with accuracy what the projection throw distance was at the Zieg, and the lamphouse wattage? Thanks!