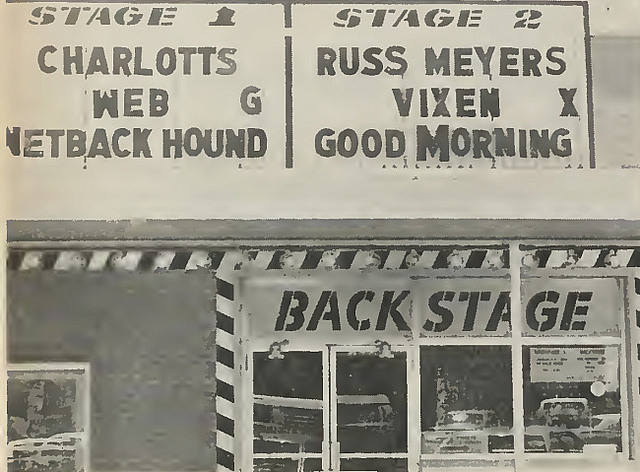 The Chaparral Twin Cinemas opened April 25, 1968. It was renamed Back Stage Theater on April 18, 1973. This small theater has been gone for many years. As I recall, it ran first run movies and had less than a hundred seats. It was tucked away in a shopping center across from Texas Tech University at 4th Street and S. University Avenue, and was popular with the college kids.

If I remember correctly, this theater was in Town & Country Shopping Center at 4th and University. This theater was next door (across the driveway to the back parking lot) to Furr’s Cafeteria.

I saw the first Star Wars film there in ‘78.

This was opened by 1969 as the Chaparral Twin Cinema. It was renamed Backstage by 1975.

Here is a November 1971 ad from the Lubbock Avalanche-Journal:
http://tinyurl.com/ykhu7mp

I worked there as assistant manager from 1977 to 1978, then part time until around 1981. It used to be a good place, then Noret decided to make it his ‘loss leader.’ We showed regular movies on one screen and X rated ones on the other. I really didn’t like that, the place had so much potential.

We were also crippled by Texas Tech’s football games, they would take over the parking lot and charge $5 to park, including trying to charge the people who worked at the theater, Baskin Robbins and Copper Caboose. Those nights we had almost no customers which hurt the bottom line badly.

Our projectors were bodged together things that had the supply reel on top, like your old 8mm projector and the take-up on the bottom. As the entire movie was on those reels, lifting say Dr. Zhivago up to face level was rather an adventure, as was staying up there the first two inches of film so it would not fall off the reel.

Add to that the amplifiers were ancient tube types and I am an electronics tech, I spent many an hour tracing problems, along with re-mounting the theater seats as they were old and would come out of their mounts.

Films came in at the bus station (1313 13th street) and as I was the only one not superstitious about that address I ended up picking up new films, dropping off old ones and building/breaking the movies.

Sorry about rambling, I liked that job.

The Back Stage will always have a special place in my heart. It was here, when I was 7, that I first saw Star Wars.