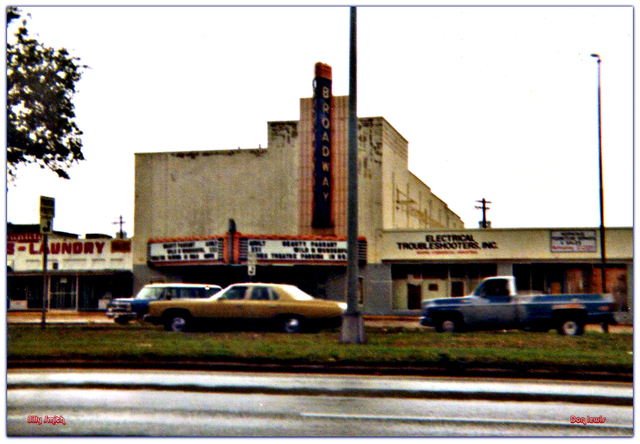 Well—someone needs to do something with it. Galveston could use a showplace.
Rog

Here is a 1968 newspaper article from better times:

After an extremely successful summer Interstate Theaters in
Galveston, The State and The Broadway, are planning bigger
and better fall and winter seasons.

Both the State Theater downtown and the Broadway Theater, 5121 Broadway, offer top entertainment. John Browning, Interstate manager in Galveston has announced that in the planning of bringing excellent motion pictures to Galveston, several films have already been booked and can be expected on the local screens soon.

Both the State and Broadway are healthfully air conditioned
and modern snack bars in both theaters are for your added
pleasure. So now is the time to save and take advantage of Interstate’s money saving offer on books and discount cards.

A 1982 photograph of the Broadway Theater in Galveston.

Here is a July 1977 ad from the Galveston Daily News:
http://tinyurl.com/pavpmn

The correct address is 5121 Broadway Avenue J. The theater has been razed and replaced by a Sonic Drive-In. You can correlate the Google maps photo and the second 1984 photo by the placement of the Aramco Blinds sign on Broadway.

I was just in Galveston and, yes, this theater is no longer there. The status should be changed to “Demolished”

From 1968 a view of the Broadway Theater in Galveston.