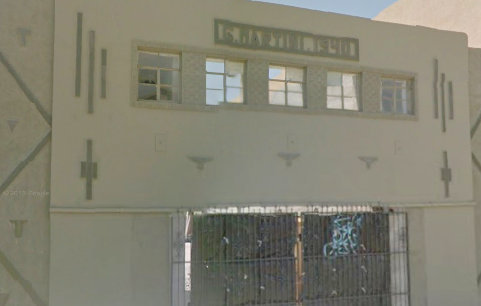 The Carver Theater opened in 1940 catering for an African-American audience. It became the Rey Theater in and switched to Spanish language films, and was soon renamed Teatro Rey. In June 1978 it was renamed La Plaza Theatre and closed in April 1979.

In 2015 the front of the building stands unaltered, but the inside is a roofless shell.

Giouse “Sony” Martini was a veteran movie theater operator in Galveston with his Martini Theatre as well as the Booker T. Washington and this theater, The George W. Carver Theater which played films beginning in 1940 for African American audiences. In 1959, Mateo Vela buys the Carver and switches to Hispanic films under its new name of the Rey Theater. Martini apparently uses the Booker T for a period of running African American films before returning mainstream until that theater’s apparent closure in 1968. Back at the Rey, Vela refines the theater’s name for Hispanic audiences as Teatro Rey and sometimes the redundant Teatro Rey Theatre from 1963 until he sold the Rey in 1973.

It runs under Teatro Rey for five more years. Likely under new and final ownership as a movie theater, on June 22, 1978, the theater changes names to La Plaza Theatre and continues with Hispanic films. Following an April 22, 1979 booking, the theater appears to have gone dark and is listed as for sale in classified listings soon after running from 1979 to 1981. An impressive 20-year Hispanic run and a nearly 40-year cinematic run for the Carver/Rey/La Plaza. The building is purchased in 1988 for the purpose of conversion to non-theater interests.