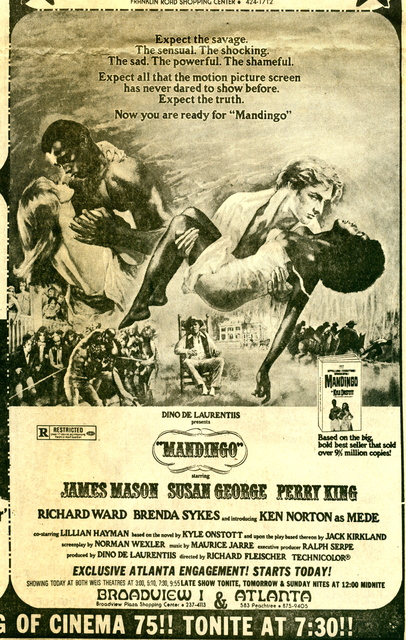 This was initially a 420-seat single screen theatre located in the corner of the Broadview Plaza Shopping Centre. It was opened by the Weis Theatres chain as the Broadview Cinema on June 19, 1970 with Linda Gillen & Michael Greer in “The Magic Garden of Stanley Sweetheart”. A second and much smaller auditorium was added on July 14, 1972 which opened with Alan Bates in “A Day in the Death of Joe Egg”.

When Weis Theatres moved out of the Atlanta area, the original theatre was converted into a nightclub and the newer theatre was taken over by Lefont and renamed the Screening Room in 1978, operating until its closure in 1998.

Broadview was opened by Weis Theatres in the early 70’s. It was their fourth Atlanta location following the Capri (now Buckhead Roxy) and the Fine Art (now Garden HIlls) and the Weis Cinema (the former Peachtree Art since demolished.) It was located on top of the underground bowling alley in the junction of the “L” shaped Broadview Plaza, later known as Lindberg Plaza and now a huge pile of dirt waiting to be turned into a mega shopping and residential development. The theatre held 420 seats and outdid even the Lenox Square #2 with its long thin shape, terrible sound and tiny screen. Alone among the Weis properties in Atlanta, it was built from scratch as the previous three and the later Peachtree Battle, and Sandy Springs, Doraville,
and Candler Mini Cinemas were all pickups.

It was decorated in typical Weis fashion with lots of odd colors and funny shapes and bends in the design of the lobby. The concession stand was hard to find because it was located behind you as you entered the theatre from the box-office. This was remedied by placing a large floor to ceiling mirror on the wall opposite which you had to pass by on the way to the auditorium. It was amusing to watch some customers start to walk up to the mirror before realizing that what they were looking at was actually behind them.

I do not remember what the first movie to play here was but the first hit was “Red Sky At Morning” which ran for at least six months. Later, the reserved seat engagement of “Nicholas and Alexandra” had a long run here as
well. As usual, the success of the theatre led to the addition of another screen, but since the shape of the auditorium ruled out any prospect of twinning the second screen was built on the other side of the box-office
which gave the layout of the place a “T” shape. Broadview II was smaller, only about 300 seats, but was a much better place to see a movie in that is was almost square in shape.

By the late 70’s Weis had almost blind bid its way out of business and all of their Atlanta locations were either closed or sold off. George Lefont, who had earlier purchased the Peachtree Battle and turned it into the Silver
Screen (Atlanta’s first full time retrospective theatre), and who would later take over the Fine Art, made the Broadview II his second theatre. It was renamed the Screening Room, and played what is now known as “Art” movies. Two good examples which I saw there were “Brother Sun Sister Moon” and “Breaker Morant.” The Screening Room also included the old box office area from the Broadview I but not, I believe, the concession area. That area along with the rest of the old #I theatre became the site of The Great Southeast Music Hall. In 1978, the Music Hall moved to the site of the old Cherokee Theatre, north of Lenox Square, just inside DeKalb County. The Screening Room remained open for many years. I do not remember when it closed, but it doesn’t matter now. The old theatres (along with the bowling alley, the K-Mart, Office Depot, the clock repair shop, and the Singer Sewing Machine repair shop, etc…) have all been hauled off to the land fill where they can spend the rest of their days with the remains of all of the other fine theatres that once graced Atlanta.

One of the later films shown here was a tribute to Claymation that was outstanding. That would have been sometime in the late 80’s, if I remember correctly. It was a wonderful theater!

The Screening Room Theatre was what I remember there, around 1980-82 this stretch of Piedmont Road was where I could be found in multiple places, shopped at the K-Mart a few doors down from The Screening Room, took a bunch of photos in the photo booth, which was already ancient at that time and so gave weird “film noir” shots. The giant Atlanta Flea Market across the street (many years before the site of Piedmont Drive-In Theater, I have read and now the Marta Train Station) Victoria Station was just down the street, as were Copperfields, Ken’s Tavern, the Harvest Moon Saloon, all gone… in fact, all I see when riding through there that appears the same is Zesto’s burger joint and the ruins of the Shoney’s Big Boy, but I digress.

I saw some great “avant garde” sort of films at The Screening Room Theatre, including Jean-Luc Godard’s “Every Man For Himself” and The Clash “Rude Boy” documentary, both in first run. Great times all those years ago.

Just to revive this, the films I remember seeing at the Screening Room was a poor animated version of Asimov’s Nightfall, Gregory’s Girl, and the rerelease of the Manchurian Candidate.

For a while I lived in the apartment complex to the north and regularly at at the Rice Bowl in the same shopping center.

I loved all the Lefont theaters. I was at the grand opening of the Plaza and saw the Wizard of Oz, Gone with the Wind, Blade Runner, and the Adventures of Buckaroo Banzai there. I saw Rocky Horror several times at the Silver Screen (and saw Shock Treatment there, too). I remember seeing Spinal Tap at the Tara.