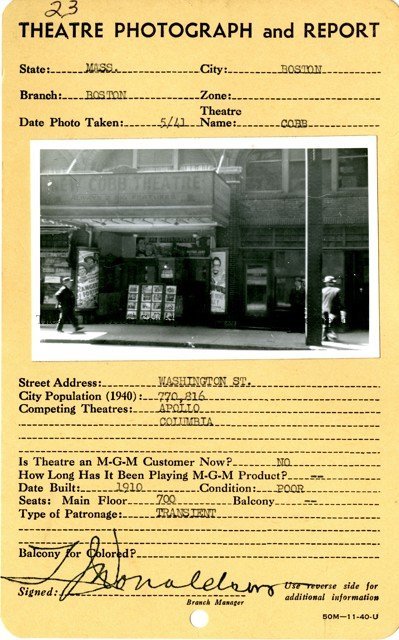 Donald C. King’s new book ‘The Theatres of Boston: A Stage and Screen History’ describes this as “a 700-seat one-floor motion picture house opposite the Columbia Theatre, next to the Apollo Theatre”.

He goes on to call the Cobb and Apollo of the Depression era “once nickelodeons but then truly crap-cans, playing the very last runs, admission 10 cents at all times. Several nearby restaurants offered a complete meal for 25 cents, which was salvation for the Depression’s unemployed, who slept in those nearby dime movie houses”. King says that they both lasted into the 1940’s.

The essay “Saga of the Movie Industry in Boston” by Joseph S. Cifre was published in some type of magazine, either a trade publication or a historical society bulletin. I’m guessing it was written around 1950, and I estimate that Joe Cifre was born around 1890. In the 1950s, his name and comments were in the newspapers occasionally because he was considered an authority on Boston movie theatres and film distribution. He got his start as a teenager with his brother, working at his dad’s nickleodeon in the West End (near North Station). That was the Monaco at Green & Hale streets in 1905. If you go to the Tufts University library system and can find the Earle Stanley Stewart theatre collection there, look for a paper-bound booklet, 8 x 11 inches, with a cream cover with an exterior photo of the Old Howard Theatre on it, and titled “Boston Convention July 1983, Theatre Historical Society”. That booklet was published by “Charlie” Stewart and contains not only the entire Cifre article, but a page of additional comments, author unknown (probably Charlie).In addition, the Collection probably has the original publication in which the Cifre article appeared.

More about Joe Cifre. In 1916 he opened a theatrical equipment company, apparently called Joe Cifre Inc. Around 1953 he sold his company to Arthur Porter and partners who changed its name to Major Theatre Equipment Corp. This company has just moved from Dorchester Avenue in South Boston to larger quarters on Holmes St. in North Quincy.

Dear Ron Salters,can you let me know how you found the Earle Stanley Stewart collection at Tufts Library. I am unable to locate it.

S.B. – Earle Stanley Stewart was the elderly owner of the Charles Stewart Theatrical supply company in Somerville. He had a life-long collection of “paper” relating to theater buildings in general, and Boston-area theaters in particular. When he died in the 1990s, I was told by the late Donald King, a theater historian and writer who was a close friend of Stewart’s, that the entire collection had been willed to the library system at Tufts University. He also told me that the library had learned that 4 additional boxes of material had been loaned by Stewart to another collector prior to his death so they successfully worked to have the boxes returned. I heard this circa-1998 or so. I have never actually been in a Tufts library and do not know what the status of this collection is today.

In a 1918 Boston street directory, the Cobb Th. is listed at 1009 Washington Street in the South End, on the west side of the street, near Cobb Street.

In his autobiography, the comedian Fred Allen (1894-1956) says that he played in small-time vaudeville at this theater when it was stilled called the Dreamland. This would have been in the 1912-1914 period.

While barker of the Variety Club, Joe Cifre was also instrumental in the founding of the Jimmy Fund. Do you have any information about him in that role, Ron? I’m interested in piecing together some of that history for my Dad (Arthur Porter) whom you mentioned in one of your comments.

jport – I didn’t know that Joe Cifre was connected to the Jimmy Fund, but it doesn’t surprise me, nor does it surprise me to learn that he was active in the Variety Club. I don’t know much about him, except as a boy theater-building hobbyist in the late-1940s and the 1950s, I recall seeing his name often in the Boston newspapers. He was an active man, and was considered an authority on Boston theaters. His company was the place to go to get theater equipment and supplies.

The April 3, 1915, issue of The Moving Picture World had an item about a Dreamland Theatre located on Washington Street in Boston, but I don’t know if it was this house or not. The item said that the building housing the theater was to be demolished:

“On April 5, the Dreamland on Washington street, Boston, will be compelled to close its doors. This theater is one of the oldest exclusive picture theaters in the city. The owners of the land and the building have decided to raze the structure to make room for a modern business block. Herman Sivovolos, who has been the manager of the house for the past five years, has resigned from his position and is now affiliated with the American Feature Company as a roadman.”

Perhaps the owners of the building changed their minds about demolishing it. I haven’t found any later items about the project.