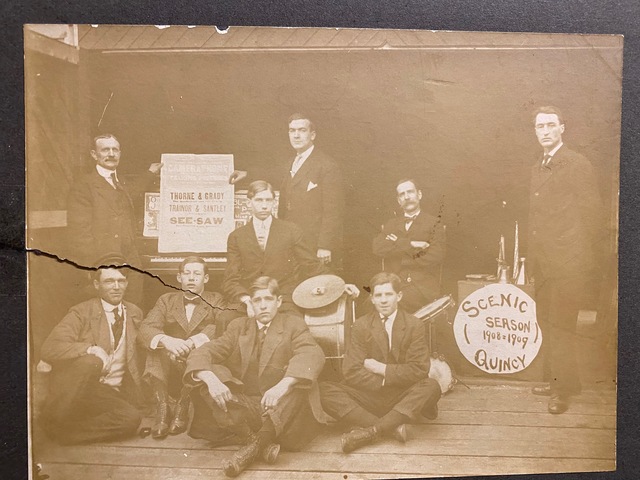 The Scenic Temple was an early neighborhood cinema in the South End of Boston. It reportedly opened on December 31, 1907 in a converted church building on Berkeley Street at Warren Avenue.

The comedian Fred Allen says in his autobiography that he played in small-time vaudeville at the Scenic Temple in Sept. 1914. However, he says it was on “Clarendon Street” when in reality it was one block away on Berkeley Street. I had no idea that there was anything but film entertainment at these Scenic Temple theaters.

The July, 1915, issue of a religious publication called The Expositor had an item about a deacon of Clarendon Street Baptist Church who, when the church had been holding its meetings at the Scenic Temple, had distributed an advertising circular about the church’s Sunday evening events. The circular said that the evening services included a half hour of movies. It doesn’t give the time period during which this was happening, but it’s clear that the Scenic Temple was used for church services for at least part of the time after it had already been converted into a movie house.

In addition to the Scenic Temples mentioned in earlier comments, there was one in Chelsea, listed as a 1,200-seat, ten-cent vaudeville and picture house in the 1908-1909 edition of Julius Cahn’s Guide. I’ve also found an item in the April 23, 1921, issue of an insurance industry publication called The Standard, saying that the Scenic Temple on Temple Street off Central Square in Cambridge had burned on April 17th, with the loss estimated at $45,000. The house had already been closed for some time.

Joe, I knew about the Scenic Temple in Cambridge, but not about the one in Chelsea. And I’ve always assumed that these “Scenic Temples” showed films only, and am surprised to learn that they had active stages, too.

Correction to my correction above of 3-26-11: there was indeed a Scenic Temple in Quincy MA. It was open as of 1906 presenting movies and vaudeville and was located in a former skating rink/dancehall on Upland Road, near Quincy center.

Ed, in the Julius Cahn guides there are virtually no addresses, so that it would just say “Chelsea – Scenic Temple”.

Thanks for looking Ron. I found some information on it as being on the corner of Second Street and Chestnut Street playing a role as a relief station and church after the Great Chelsea Fire of 1908.

If it showed movies please do the honors to it’s history and add it as a new listing.

Ed- You’re our man in Chelsea, so you can add it. I went to Google Books and could not find Julius Cahn’s Theatrical Guide for 1908 which Joe Vogel references above. But I found the 1906 edition and it says “Chelsea, 40,000 population, No theater at present”. That does not mean there was no theater there, only that there wasn’t one booking road attractions, which is what the Cahn guides were all about. Joe Vogel says that the Scenic Temple in Chelsea had 1,200 seats and booked both motion pictures and vaudeville acts. If you have a street address then you can create a page for it here in CT.

The Scenic Temple was definitely in operation by 1908, as contemporary sources indicate that it was used as a dispensary distributing station during the Chelsea fire, which began on April 12 that year (see The Burning of Chelsea, published in 1908.)

Here is a link to the Scenic Temple listing in the 1908-1909 Cahn Guide. It notes that Chelsea still had no regular theaters, but there were two other movie houses in town; the Star and the Theatorium.

Further to the list of Scenic Temples in eastern New England mentioned in previous posts: there was a Scenic Temple in Portsmouth NH as of 1916 and prior years. It showed both movies and vaudeville and was the former Pierce Hall. It’s not listed in CT.