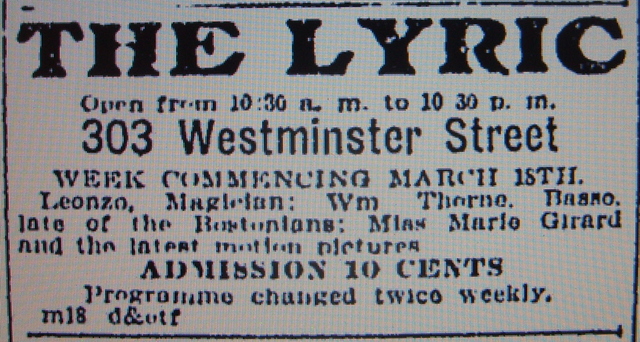 The Lyric Theatre was located on Westminster Street directly across from the Nickel Theatre and operated in a kind of mean-spirited competition with it rival neighbor. It opened in 1907 and closed that same year because of bad management.

In his book Temples of Illusion Roger Brett gives the short history of this doomed theatre:

“Next was the Lyric Theater at 303 Westminster Street, opening on March 10, 1907. It was a converted store and one of the few movie house failures, closing about seven weeks later. The Lyric’s proprietors, whose identity has been mercifully lost in the mists of time, right from the start conducted a smear-filled advertising campaign directed at Abe Spitz’s Nickel across the street. Abe, who was no neophyte at this game, responded in kind. (When his Empire had a season of summer vaudeville following the closing of Keith’s headline winter season, Spitz presumptuously bannerlined his newspaper ads, ‘After the Minnow Comes the Whale.’) Since the Lyric was obviously run by green-horns, it is not at all unlikely that the veteran showman Spitz prevailed upon a few distributors then in business to forget about delivering the Lyric’s films. Whatever the reason, the store-front operation soon folded; and in 1907 a movie house didn’t fold for no reason at all.”

This theatre was located in a spot (and perhaps the same building) that is now part of the new posh Providence Hotel, whose entrance is on Mathewson Street. At the corner of Mathewson and Westminster is a pleasant little “boutique park” with benches. Behind it, in the hotel, is the fabulous Italian restaurant L'Epicureo. In the same general spot, in the 1980s, was the video porno-theatre, the VIP Luxury Cinema.

In June of 1896, Vitascope presentations made their appearance in Providence, at 305 Westminster, which was the same place pretty much as where the Lyric Theatre would open eleven years later.