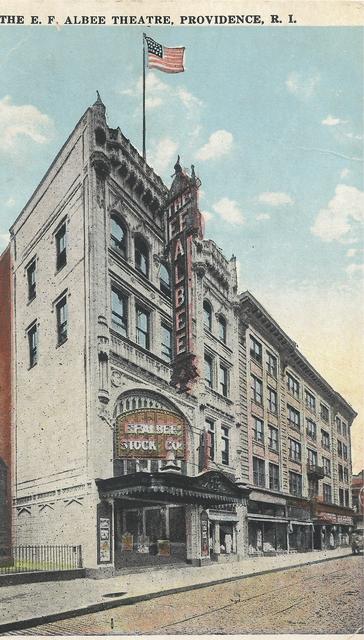 Edward Albee built his grand E.F. Albee Theatre on Westminster Street for the E.F. Albee Stock Company as World War I was nearing its close. The theatre opened on April 21, 1919 as the boys were coming home. The exterior of the theatre was Gothic in spirit to complement the style of its next-door neighbor, the lovely Grace Church. The Albee Theatre was built on the site occupied by the earlier Nickel Theatre, which had been Providence’s first full-time movie theatre since 1906. Just the Albee’s entrance alone occupied the entire area formerly inhabited by its smaller predecessor.

Marble was the theme here as in Newport’s Marble House. The Albee Theatre had three lobbies, all wainscoated in Skyros marble. At the left of the outer lobby there was a massive box-office of the white marble. The central lobby had a large marble fireplace. There were tiled white marble floors and stairways, a magnificent marble railing at the rear of the audtorium. There were finely wrought bronze doors, lush rugs and carpeting, a beautiful Italian room paneled in prelate purple, a material copied in color and design from the vestments of ancient Roman prelates. The Albee Theatre was more than a movie palace. It was an architectural masterpiece, akin to a papal palazzo. No hyperbole is needed.

The large auditorium had two balconies and ranges of side boxes at each level. There were 2,314 velvet-upholstered seats. Opening night on April 21, 1919 featured a series of vaudeville acts and other entertainments. As a surprise treat, none other than George M. Cohan, Providence’s native son, was the first performer to be introduced by manager Charlie Lovenberg to an enthralled audience and to sing and dance for them.

The Albee Stock Company that the theatre was home to included such future stars as Edward G. Robinson and the young Spencer Tracy. Over the decades the theatre would move from vaudeville and stock productions to touring theatrical shows that brought countless celebrities to its stage, among whom were Catherine Cornell, Francis Lederer, Dorothy Gish.

Movies came here in 1925 when a Wurlitzer organ was installed to accompany the silent era films. For many decades, under the name of R.K.O. Albee, the theatre gave Providence audiences Hollywood films in abundance in a classy atmosphere of elegance, especially after a major restoration in 1937. By the late-1950’s, as with all other downtown palaces across the land, the Albee Theatre went into a decline. In 1965 the life of the R.K.O. Albee Theatre as a movie theatre came to an end. As one of the reasons, the management cited the competition from area drive-in theatres. The theatre at the time was operated by R.K.O. Rhode Island Corporation and owned by R.K.O. Theaters, a New York subsidiary of the Alden Corporation, and it was one of the 47 theatres in the R.K.O. chain. The last program of films under this aegis was on August 31, 1965, with the Doris Day double bill of “Send Me No Flowers” and “The Thrill of it All!”. Ironically, it was the same day the new pedestrian mall on Westminster Street was dedicated amid considerable hoopla. It too has since disappeared.

Many proposals for the future of the house were offered by cultural and civic organizations. Editorials and articles in the Providence Journal recommended the use of the theatre as an arts facility. “The city cannot afford to junk the Albee,” one editorial proclaimed. The Albee Theatre was bought by entrepreneur-impresario B. A. Dario who created the B.A. Dario Foundation with the hope of running the place as a non-profit entity with public arts funds assistance. It seemed like a new lease on life. Dario pledged to do anything to save the place. It was used for a time for live performances and celebrity appearances, but they were few and far between. Under this new ownership, films too returned in the summer of 1966 in the attempt to defray the enormous expenses. None of this met with any real success. Several organizations that were approached, like the R.I. Philharmonic, were not interested in using the place. Neither was Trinity Repertory Company, opting instead to buy and convert the nearby Majestic Theatre after 1970. No coherent plan emerged to keep the place alive.

Debts mounted and by 1970 the owner decided to demolish the theatre, perhaps worried that the place could never be viable again. On June 8th, the Journal wrote, “The wreckers will move in and bring the house down, leaving a flat area for which the B.A. Dario interests, owners of the property, have no present plans.” In retrospect, that decision appears to have been hasty and precipitous. In June there was an auction of the theatre’s contents and fixtures. During the demolition of the building in November, a wall collapsed onto the adjacent Grace Church, causing significant damage to one section of it.

The ultimate result was a parking lot that remains to this day. The only nod to the existence of the great theatre is a minuscule sidewalk plaque reminding us in its pathetic way that this is where the fantastic and wondrous Albee Theatre once stood.

The destruction of the Albee Theatre in Providence seems akin to the demolition of the esteemed Roxy Theatre in New York. The more fortunate Loew’s State Theatre a block away on Weybosset Street would make an enviable progression in succeeding years to become the Providence Performing Arts Center. No such destiny awaited the Albee Theatre. One survived, the other perished. They were indisputably the two most beautiful, most magical theatres ever built in this Rhode Island capital. The loss of the magnificent Albee Theatre was heartbreaking to many Rhode Islanders and to all theatre lovers who care about such joyous larger-than-life places. Just being in them could make us all feel more like gods than mere mortals.

Bwana Devil, third-dimensional picture, was highly exploited when it played at the RKO Albee. Dave Levin set up a battery of third-dimensional viewers in the outer lobby, and crowds were lined up at all hours, scanning views taken from the picture. The Albee charged $1 top for evening and Sunday performances.

Charlie Chaplin’s silent film masterpiece The Gold Rush opened at the E. F. Albee Theatre on September 7, 1925. Here is a nice ad from a local newspaper the day before:
Newspaper ad.

An article on theatre-manager Foster Lardner appeared in Providence News on November 11, 1929. At that time he managed both the Victory (Keith’s, later called Empire) and the Albee.

In November 1929 the Albee Theatre was hosting silent screen star Claire Windsor. “Shake hands with Miss Windsor. The famous star will hold receptions in the Italian room of this theatre following afternoon and evening performances,” said the ad. The film on the program was Frank Borzage’s 1929 silent and part-talkie The River with Charles Farrell and Mary Duncan.
NEWSPAPER AD for November 2, 1929.

The new E.F. Albee Theatre opened on April 21, 1919. The opening night gala (with George M. Cohan) and the theatre itself (“beautiful beyond words”) were discussed in The Providence News, April 22, 1919.
ARTICLE
Also, this ad appeared in newspapers the following day.
AD

Arturo Toscanini conducted the La Scala Orchestra at the Albee on March 20, 1921. Sunday classical concerts were very common in an era when Providence theatres could not present movies, vaudeville, or plays on Sundays. These mouth-watering concerts and recitals have nothing to compare with them today in Rhode Island, sorry to say.
ARTURO TOSCANINI

My brother Gerald and I went to the RKO Albee Theater starting in 1957. My Grandmother Clara and Great Uncle Albert took us there. The Albee was my favorite theater in downtown Providence. I vividly remember the posters and lobby cards from Roger Corman’s “The Undead” and “I Was a Teenage Werewolf” and many, many other movies that played there.

I have a box of Jean Harlow photos that belonged to Albert. In the box is a large envelope from RKO Radio Pictures, Inc. in New York that is addressed to “David Levin, Mgr., RKO Albee Theatre” and another envelope from “Irving Klaw” in NYC. I believe this is where Albert may have purchased or was given these black and white photos.

I am in the process of writing a book on the late actress Sandra Dee who I met in 1994 for an interview. I saw many of Sandra’s Universal Pictures at the RKO Albee.

I have collected several RKO Albee postcards through the years. In my book, I plan to talk about what it was like going to the Albee to see her films.

I am looking to correspond with anyone who has any knowledge and memories about the subjects I have written here.

I can be reached at

The Theatre Historical Society archive has the MGM Theatre Report for the RKO Albee; it’s Card # 551. There is an exterior photo taken in 1941. The theater is on Westminster St. Condition “Good”. It’s over 15 years old (as of 1941) and does not show MGM product. The seating is listed as 938 on the main floor and 1264 in the balcony. (I’m not sure these figures are very correct).

1941 PHOTO OF ALBEE THEATRE IN MGM REPORT Thanks to Theatre Historical Society of America.