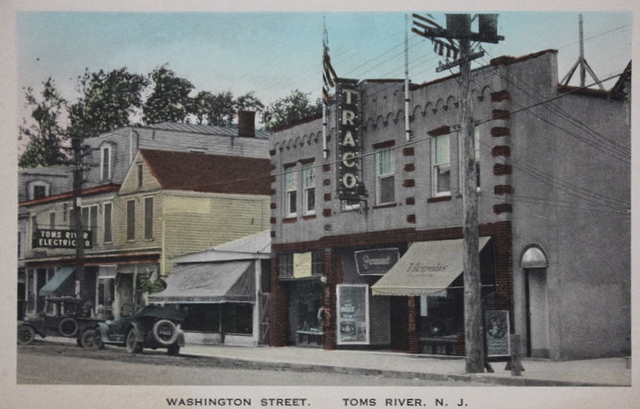 The Traco Theatre dates from 1920. In the 1930’s it was used by the local Kiwanis club for movie fundraisers. Club member “Izzy” Hirshblond was the theatre manager. Still listed as operating in the 1951 FDY. This theatre burned down in 1962 as shown in the attached link.

Old postcard ca 1918 from the movie “Tinsel” on the right side ad:
View link

This theatre was built around 1920 by Isadore (Izzy) Hirshblond. It had vaudeville and silent film in the early days. Today the site is part of the property of the Sovereign Bank. A photo, identical to my 1/22/06 post, can be found on page 61 of Images in America: Along the Toms River.

A new small independent theater opened on the original site. It is also named the Traco Theater. Here is a link to the site: http://tracotheater.com

I recall a drive-in in toms river… I saw LOGANS RUN there… what ever happened to it?

Circa 1940 photo added courtesy of the AmeriCar The Beautiful Facebook page.

Circa 1956 photo added, appears to be called Sun Ray. Or the Traco marquee is hidden or gone.

On the front of that sign it Looks like it says “Sun Ray Drugs,” which was a drugstore chain based in Philadelphia at that time. Possibly the drugstore took over the theatre space?

February 3, 1929 At 9:30 a call for a fire was received at the Traco Theatre downtown [Asbury Park Press gives the alarm time as 7:45 am]. The alarm was turned in by George Gaskill a local Dairyman and Harry Harris who were passing by. The building was a sixty-five foot brick theatre owned by the Traco Company. Thirty members responded with two chemical trucks and one pumper. The loss was recorded at $75,000.00 for the building and $10,000.00 for the contents. Log book remarks stated “fire effectively handled.” The fire was attributed to an overheated bearing in a motor in the basement. Fireman William Farrington fell through a trap door in the stage while fighting the fire. He fell into the cellar into about five feet of water and was subsequently rescued. Despite the damage the theatre was slated to reopen in a few days.

November 27, 1962 Fire reported at 2:15 am at the Trco Drug Store. The original Traco was built as a theatre and was a venue for vaudeville acts traveling through Toms River to get to Atlantic City. Abbott and Costello performed at the Traco on a few occasions. The fire was discovered when Police were summoned to the building by a burglar alarm sounding. The building was one of the few downtown businesses that was built with masonry bearing walls. These masonry walls kept the fire from spreading to adjacent structures. Firemen at that time were very concerned with the wood frame construction throughout the downtown area. The Traco was purchased from the Traco Theatre Company in 1952 by Mr. Morris Oretsky for an amount in excess of $100,000.00 dollars. Mr. Oretsky converted the building from a theatre to a drug store. Oretsky leased the building to Phillip Fried of 14 Smith Road. Mr. Fried operated the building under the business name of the Traco Super Drug Store, Traco Hospital Supply Company and Traco Figurama. According to some newspaper articles the fire was an eight (8) alarm blaze. Departments from surrounding towns assisted Toms River No.1 and No.2. Fire engines were drafting water from the Toms River to meet the high flow demands. The building was totally destroyed and the masonry walls that were left standing were demolished the next day a safety precaution.