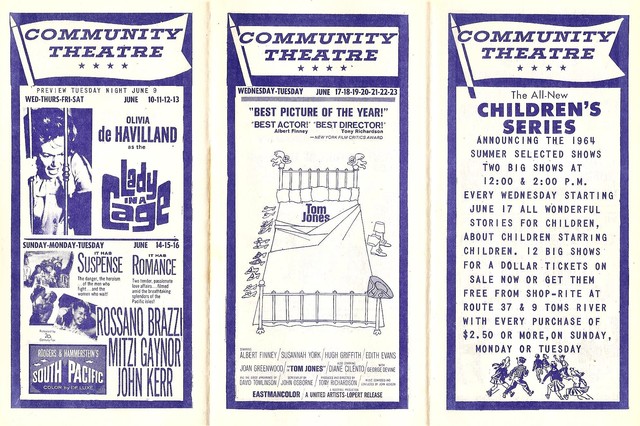 Listed in the 1951 Film Daily Yearbook, this theater has been converted to a community center.

In 1963 or 64 I was promoted to “City Manager” of Walter Reade’s Toms River theatres which included the Community, the Toms River Drive-in on Rt. 37 near Hooper Ave. (Now a shopping center) and the Bay Drive-in which was on Rt. 37 just west of the Seaside Park bridge over the bay. There was no competition for Reade in the town at that time. The Traco Theatre, just a couple of doors down the street from the Community on Washington Street, had burned down a couple of years earlier. The Traco was owned by Izzy Hirschblond, a friend of my Dad’s who was also in the business in Trenton. When I was there we played “split weeks” meaning one attraction on Wed. thru Sat. and another Sun.-Tue. The Community was built with colonial architecture with big white columns in front, paned glass windows looking into the lobby, brick circular walk from the sidewalk to the boxoffice, a white picket fence out front enclosing a lawn and flower bed. On the lawn there was a one-sheet board which was the only advertising for the current attraction, there being no marquee. The theatre looked more like a town hall or a library than a theatre. Reade had other “Community theatres with the same design. One was in Morristown, NJ and another in Saratoga, NY. Years ago he had built the Brunswick and Hamilton theatres in Trenton which RKO took over and they were the same design except that the columns were small and square instead of round and massive like the Toms River venue. After I had left Toms River Reade built the Dover Cinema in a shopping center on Rt. 37, GCC built a triplex in Bricktown and another small circuit built a twin in Bricktown. This was the demise of the Community. It hung around for awhile but it finally closed, I’m not sure when…the late 60s perhaps? The Toms River drive-in was sold because the land it was on was so valuable and the Bay just closed…not sure why. Those were happy days for me in my movie career.

Listed in the 1944 FDY. Listed as a Walter Reade Theatre in the 1956 Film Daily Yearbook.

Built in 1937 as a Walter Reade theatre. Izzy Hirshblond began managing it in 1941 under the Toms River Company. Upon his death in 1961 it reverted back to Walter Reade management. A photo can be found on page 61 of Images in America: Along the Toms River.

Definitely was open in 1977, I remember seeing Herbie Goes to Monte Carlo here as a 7 year old in the summer. Can’t recall much else about the experience however, not even the film.

This theater was a Thomas Lamb design. There’s a picture of it in Boxoffice of August 21, 1937.

I have a question regarding the posting above from Mike H. Hoping Mike is still registered here and will answer, or anyone else who has the info I am seeking. Mike you mentioned managing several Walter Reade theaters in Toms River, including the Bay Drive-In and Toms River Drive-In. Can you tell me if either of those two outdoor theaters had any mechanical rides under their screens, such as a merry go round or a miniature train? Sorry to post here but those theaters you mention do not have a separate page for comments – thank you!

Linkrot repair: here is a fresh link to the 1937 Boxoffice article, with photo, about the Community Theatre in Toms River.

2013— the space is now offices, restaurant, and other businesses.