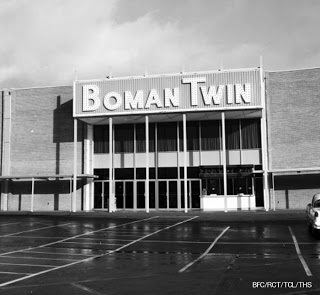 The theater was not named “BOMAN”? I was looking through some old Tulsa World newspaper archives, and that is how it’s listed. I know the shopping center the theater was in was also called Boman. In any case, and no matter what the name, this theater was truly a great loss.

Going to the Boman was probably the closest thing to going to any of the bigger movie palaces in the larger metro cities. I can remember the almost legendary long lines to purchase tickets that wrapped around the building. And in the summer, that’s really not a pleasant thing (or smell). However, once past the heat and the lines, the theaters inside were absolutely spectacular. Very large houses with a stage in-front of each screen.

The theater went to second-run for a short time before its closing and switch to what’s now Laser Quest. As with all of the older theaters, the demise was evident. The marquee began to fall apart, the great “BOMAN TWIN” lights on the outside began to burn away, and thus tell the story of the end.

Go to this link for color photographs of Tulsa’s lost twin cinemas;
http://www.losttulsa.com/

The recently opened Boman Twin Cinemas (the correct spelling), in the Boman Acres Shopping Center, was the subject of an article in the July 26, 1965, issue of Boxoffice Magazine. It was built for the Family Theatres circuit, and the two auditoriums were called the Boman West (with 800 seats) and the Boman East (which had 900 seats.) The theater was designed by the Tulsa architectural firm of Whiteside, Schultz & Chadsey, who would later design at least two other Oklahoma theatres (the Eastland Twin Theatres in Bartlesville, opened 1968, and Tulsa’s Park Lane Theatre,opened in 1970.)

From the Boxoffice article’s description, the Boman Twins were quite lavish for the time. Both featured screens 42 feet wide by 18 feet 6 inches high. The Boman East was decorated with beige walls and draperies, turquoise seat upholstery, and a Havana brown waterfall curtain. The Boman West had turquoise walls and draperies, brown upholstery on the seats, and its waterfall curtain was gold. Lobby decor included walnut paneling, and carpets throughout the theatre were at least an inch thick. Rest rooms were placed between the auditoriums.

Both auditoriums had Simplex projectors and Altec Lansing sound systems. Plans were afoot to install 70mm projection equipment and six-track sound in the west auditorium by December of 1965.

On the theater’s opening, the Tulsa World published a 12 page section devoted exclusively to features and advertisements relating to the theater. Maybe somebody in the area can dig up a copy.

Closed by UA on the same day as the Spectrum Twin, Monday, September 4, 1989, showing in one auditorium Sylvester Stallone in LOCK UP, and in the other, the James Bond film LICENCE TO KILL. (Tulsa World)