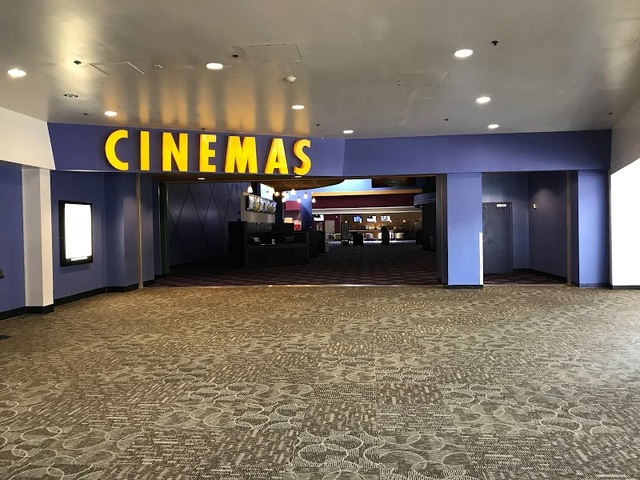 With the coming of the Providence Place Mall in 1999 and the opening of this cinema complex by Hoyts Cinema, movies once again returned to downtown Providence after decades of absence, and with a vengeance. Located on the floor overlooking the third floor food court, the cinema entrance faces the one for the Feinstein IMAX Theatre, which opened in 2000 (and has now been incorporated into the complex since it was taken over by Showcase Cinemas). The auditoriums vary in size and are situated off a substantially sized lobby.

The theatre is annoying to try to get to if you are walking in from street level, since the various escalators and elevators don’t ascend with any logical continuity but force you to walk all over the place in order to get to where you’re headed. It’s a bit easier if you park in the vast adjacent garage.

Most of the programming duplicates what is shown at the two Showcase Cinemas in nearby Seekonk, Massachusetts as well as the two in Warwick. Shoppers at the large and often trendy mall (boasting a Nordstrom’s) can conveniently take in a movie before or after their material quests. Substantial parking discounts are given for purchases (including film tickets) totaling over $10.

Ron, in answer to your question of July 30th, the last downtown Providence theatre still showing movies before this had to have been PPAC/Loew’s State/Ocean State/Palace, which was still showing movies in the 1980s with repertory and then a short period of first run. Although a performing arts center, it still has special movie events from time to time. The porno-video VIP Luxury Cinema, which closed in 1986, is not under consideration. The Majestic is now Trinity Rep and the Strand is now Diesel. Everything alse has been demolished. The Cable Car Cinema has been operating since 1975 but cannot be truly considered “downtown,” since it is located in the RISD area on South Main Street.

The actual opening date of this cinema was Friday, April 14, 2000. The total seating capacity was given as 4,100 seats. The opening-day attractions included Keeping the Faith, American Psycho, 28 Days, Where the Money Is, Rules of Engagement, High Fidelity, Return to Me, Ready to Rumble, The Road to El Dorado, Erin Brokovich, American Beauty and Skulls.

the popcorn was terrible when i complained to a manager they could care less- next time I will either go somewhere else or sneak in my own stuff- anyone else have any probelms with this theatre?

How is this theatre doing? I know Providence has experienced a renaissance since I moved from the state in ‘80. I remember going to the Strand back in the late 60s when I was a kid and there literally was a riot (they ransacked the box office) and we were robbed. Providence was not a nice place back then. There wasn’t much excuse to go downtown, other than to patronize Lupo’s.

I’ve been buy the mall many times after de-training from New York, but have never stepped foot in the mall.

Are there security issues in this theatre? Do folks from the ‘burbs come in?

I believe it is doing well, judging by the times I’ve been. And there is a popular IMAX right across from the entrance to this theatre. The mall is a huge success, from the looks of it. There were some sporadic problems in the mall itself with rowdy youngsters, but nothing major. People from the suburbs do come here.

When actor Anthony Quinn lived in Bristol, he used to come here. I once bumped into him and his kids/grandkids. They were going to IMAX, I believe, and I overheard Quinn say something about Nordstrom. Quinn used to hang out with Mayor Buddy Cianci, who is now serving a prison term on racketeering charges. But he did turn the city around. There are lots of popular restaurants in and around the mall. It is adjacent to the Waterfire events. A new GTech building is going up across. The whole area is hopping.

The Strand now is Lupo’s.

The popcorn here tasted stale, salty and smelled burnt. Also, the concession stand employee told me the Pepsi machine had no more syrup and it would take them 10 minutes to replace the syrup. I e-mailed National Amusements about my concerns.

Also, the auditoriums are so far apart from each other and theatre 15 is the farthest from the lobby which is why I didnt speak with management while I was there.

Last time I was at the theatre they shut it down early because of police suggestions, citing security concerns from a riot because of the movie Get Rich or Die Tryin'.

Is this now part of the Rave circuit?

Thankfully, no not part of Rave. National bought the IMAX across the way back in 2008 in addition to adding Chatters Bar & Grill which always seems empty. Update to 17 screens with the IMAX.

Went to this theater on Saturday with the wife to see Fist Fight as part of a deal with the Omni hotel. We saw it in theater 15 which seemed a long way away from the entrance. Theater reminds me of the College Point multiplex in Whitestone, Queens which is closer to home (stadium seating).

For months this place has been presenting the regular Metropolitan Opera HD showings, live from New York. Before they began, there was no venue in the downtown Providence area offering the popular series. One had to go to the Showcase in Warwick or else to nearby Massachusetts. I attended a packed showing of “Porgy and Bess” yesterday. Since I live nearby, it’s nice for me to be able to walk here.