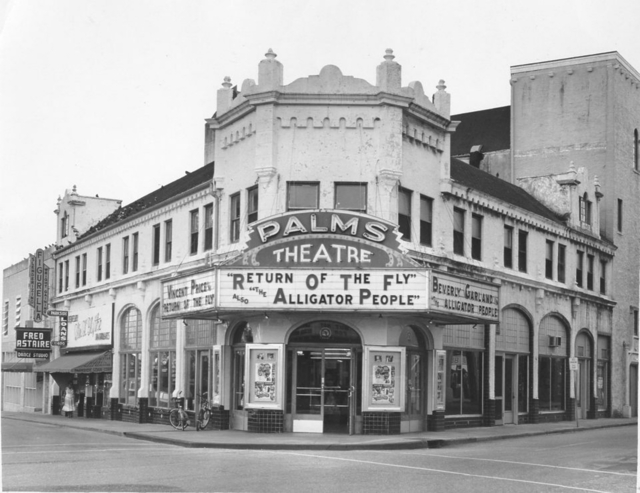 Built on the site of Kettler’s Bijou Theatre, the Kettler Theatre was the largest movie theatre south of Atlanta when it opened December 24, 1923 at the corner of Clematis Street and Narcissus Avenue in downtown West Palm Beach. It initially had 1,200 seats. By 1933 the seating capacity had been reduced to 700 and on October 6, 1935 it was renamed Florida Theatre operated by Paramount Pictures Inc. through their subsidiary E.J. Sparks.

There is a small picture of the Kettler/Palms theater here (the enlarge link does not seem to work): View link. According to the information below the picture, the theater at its opening sat 1,400. If that was the case, then a much better case could be made for the claim that it was once the largest theater south of Atlanta.

I remember The Palms well, and yes, Elvis did play there, saw him there. The new theatre across the street on the corner of Clematis and Narcissus, was The Florida. The Coral was up Clematis Street, next to,or near Burdines. The Surf was over on Datura, in the 300 block.
The Florida became The Stage Company, a concert house and was then remodeled (several million) into The Burt Reynolds Theatre. That went under, and Bob Cuillo purchased it, and ran it for about ten years as The Cuillo Theatre. Recently, the City of West Palm Beach bought it for the new home for a theatre, “Dramaworks”. That will open on 11-11-11, as a legitimate theatre. The City of West Palm Beach no lomger has any movie theatre(s) in the immediate downtown area. There is one with many tiny screens in City Place. Palm Beach has no movie theatre either. They destroyed the last movie palace in Palm Beach County when they destroyed The Paramount. Once they are gone, they will never be built again, and all of ours are gone in Palm Beach County. PROTECT YOURS if you are lucky enough to still have one.

And by-the-way, it was not uncommon, at that time, for road shows to play 4 shows a day. I went after school, and it was still daylight when we met him at the stage door after the show. He most likely had at least two more shows after the one we saw. In Vaudville, the performers did eight shows a day.

the Palms was my favorite theater on Clematis . It was so gorgeous with a large curving staircase up to the balcony . Across the street was the Florida . I saw the 10 Commandments and Ben-Hur at the Palms ,but was always mezmerized by the decor in the Palms .Red carpet and goldpainted woodwork . I really missed it when they demo-ed it for a parking lot. Everyone shopped on clematis and Burdines had valet parking . Clematis was so exiting especially at Christmas time .The streets were teeming with people . It was THE place to be. So nostaligic ,great memories .

The Kettler Theatre was built on the southeast corner of Clematis Street and Narcissus Avenue in 1923. It might have opened as late as early 1924. The Kettler replaced an earlier theater owned by Carl Kettler on the same site, the Bijou, which was itself the second house of that name in West Palm Beach. There is a photo of the second Bijou dated July 30, 1923, on this page of the Palm Beach Post web site.

Carl Kettler’s intention to demolish the Bijou and build a new theater on its site is the subject of this article from the Palm Beach Post of October 22, 1922.

The June 1, 1922, issue of The Manufacturers Record had this item:

As the description does not fit the Kettler Theatre, the plans were obviously changed before construction began. it’s possible that a different architect was brought in to design the theater as actually built. I’ve been unable to find any other references to a Florida architect of the period named Bruce Mitchell.

So many theatres in downtown WPB and the theatre in Palm Beach..all gone now..such a shame!

The architect’s name as given in the 1922 Manufacturers Record item I cited in my previous comment (Bruce Mitchell) was surely erroneous. One of the area’s noted architects during the period when the Palms was built was Bruce P. Kitchell. He was a master of the Spanish Colonial Revival style, and designed at least one other West Palm Beach theater, the Stanley (later the Palace.) It was most likely Kitchell who designed the Palms.

Uploaded a 1916 photo of the Kettler showing The Foolish Virgin.