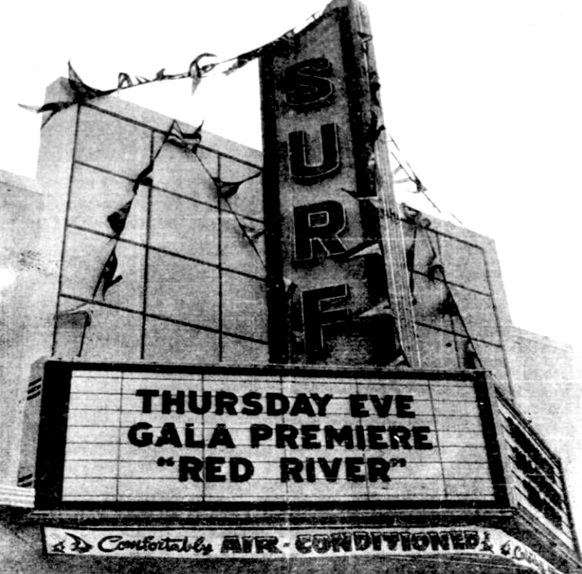 According to Boxoffice Magazine’s issue of January 8, 1949, the Surf Theatre had recently opened. It was designed by Palm Beach architect Frederick G. Seelman, and was originally operated by Tellco Theatres. It was described as a masonry and steel building with a marble front, a triangular marquee, and a two story pylon bearing the name Surf in red and blue neon.

The auditorium ceiling was painted in pastel shade of lavender and rose, the proscenium was surrounded with detailed molding to suggest a giant picture frame, and there was a deep red stage curtain. Carpeting was green, gray, and red.

The July 17, 1948, issue of Boxoffice contained an announcement that Seelman was designing a theater of about 1000 seats in West Palm Beach for Tellco, but this item said that the theater was to be called the Town. I don’t know of this was the house that became the Surf, or if Seelman designed two theaters for Tellco at about the same time.

Word of the Surf’s imminent demise, June 1962, to allow a bank’s expansion:

The closer: “Through a Glass Darkly.”

The Surf, opened on December 23, 1948. Atlantic National Bank bought it, around 1962, to expand their drive-through. The Surf was the first of our local theaters to screen in Cinemascope, with The Robe. That carpet wes a gray background, with red flowers and green leaves. Beautiful, but not a “Movie Palace”.