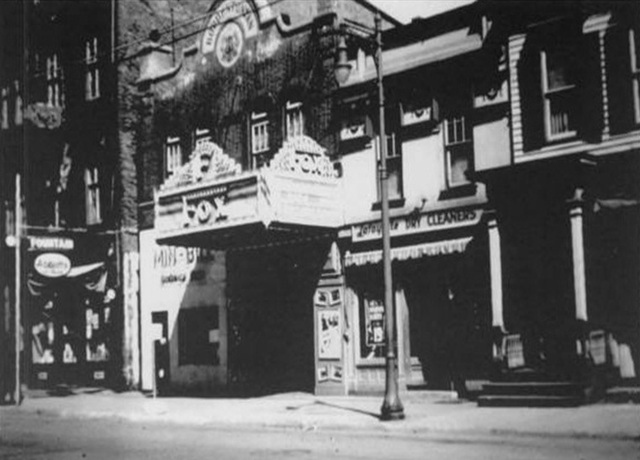 Opened in 1915, in 1923 a Kimball organ was installed. (incorrectly attributed to Bardentown, NJ). It was renamed Fox Theatre in 1925. This theatre is still listed as operating in the 1951 Film Daily Yearbook. It was later renamed Sharon Theatre and was closed by 1960.

Demolished, replaced by a small apartment building. Correct spelling of the street name is “Farnsworth.”

Originally opened in 1915. Subsequently purchased by JB Fox and operated into the 1950s.

This book about Bordentown states that the theater was first the Bordentonian, then the Fox and last the Sharon. I’m not sure if this link is going to hold up:
http://tinyurl.com/2rfgj4

The name of the theater was changed from Fox to Sharon in February 1955.

I wonder if they print those a year ahead, like almanacs.

Here is a description of the Bordentonian Theatre from the July 10, 1915, issue of The Moving Picture World:

“The Bordentonian theatre, Bordentown, N. J., was recently opened to the public. The theatre is of Gothic architecture and is 221 feet in length and 43 feet in width, and cost about $30,000. It has a seating capacity of 700 and is absolutely fireproof in construction. E. K. Minnick, of Bordentown, who for more than twenty years has been interested in the theatrical business, and who managed the only other theatre of which Bordentown could boast, the Park Street Opera House, is managing the new theatre for the owners, the Mercantini Brothers.”The September 12, 1925, issue of Motion Picture News had this item about the reopening of the house as the Fox Theatre:

“JACOB FOX, executive of the Fox Amusement Company and successfully operating theatres in Riverside, Beverly and Burlington, New Jersey, has reopened the Bordentonian theatre and renamed it the Fox. The Bordentonian was at one time under the management of the Mercantini Brothers who are local merchants of Bordentown. Their other enterprises taking up too much of their time, the Mercantini’s leased the theatre to the United Theatres of America, a Newark corporation that after a short period, gave up the project. Since then the house has been dark up until the time that Mr. Fox added it to his circuit. The whole theatre has been completely renovated and reconstructed, the lobby being entirely changed, new lighting fixtures installed, new scenic equipment, and many other changes made to make the house more comfortable. Feature pictures will be shown with changes on Mondays, Wednesdays, Fridays, and Saturdays.”

Here is a photo of the house as the Sharon Theatre. It appears to be closed, and the photo probably dates from around 1960.