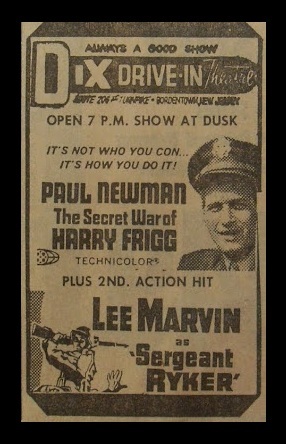 It isn’t listed in my 1956 Motion picture Almanac so it had either closed or hadn’t been built yet,wish I had more.

This was located off the northbound side of 206 between Dunns Mill and Georgetown Roads, north of Interchange 7 of the New Jersey Turnpike. The Turnpike Authority currently owns the property and is using part of the lot as a staging area for construction equipment (the Turnpike is being widened in this area). Aerial photos suggest that trees have overgrown the rest, and that little or nothing remains of the drive-in facilities.

If memory serves me correctly, this was the drive-in of choice when I was stationed in Ft. Dix, 1960-61. I remember one night we went to see a nudie film in 3D called “Paradiso”. It was billed as “The Boldest Look You Ever Took”. I remember nothing about this feature but the second movie was one about a nudest resort. It was ho hum. But the interesting thing was that as we left, not to far into the movie, there was a sequence of a naked woman on a trampoline. When we got out to the highway you could see her naked image bouncing over the low shrubs and trees. Needless to say traffic was just at about a standstill.

As I recall in later years there were restrictions about new drive-ins being built so that the screens would not face the highways. Also, I believe, they were trying to restrict the “product” which was playing at drive-ins, particularly ones like the Dix, whose screen was visible from the highway.

According to the Drive-Ins.com site this was a seasonal operation from April-September.

One of the last times I was there was with my Uncle George and my sister Sharon; the last of the two films shown that night was “The Legend of the Lone Ranger” (1981). By then, alas, its glory days were long, long past: finding a working speaker was a crap shoot; the playground area already had that abandoned-for-years patina, with swings that hung lifeless and unusable; food and beverages that had all the appeal of Depression-era soup kitchen; and management who obviously no longer cared, as long as people came through the gates. I also remember all-night-long marathons of films they showed, to which my sister and her boyfriend took me to; I got nearly through the third, “Flesh Gordon”, but fell asleep; obviously, they weren’t fans of what they’d seen, either, because before long we were back home (in Trenton). But for all that, it was really terrific, that singular experience of going to a drive-in, and we were lucky, those of us who grew up in the area, to have TWO to visit: this and the Lawrenceville Drive-In, in Lawrenceville. I really do feel for those too young to have enjoyed it, too young to not even KNOW what a drive-in IS.

Why the nane Dix?

Presumably because of the proximity to the then Ft. Dix.