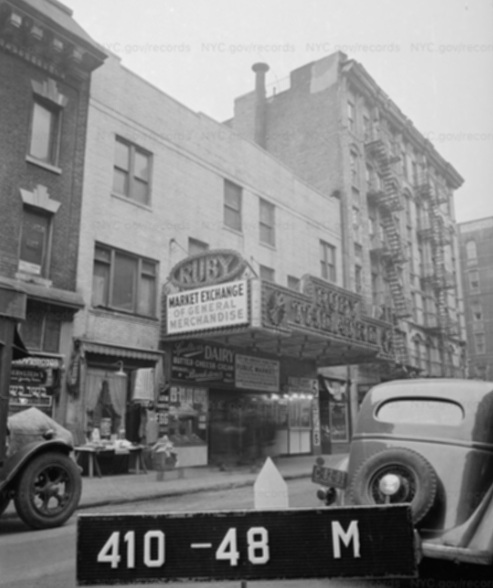 Construction of the Ruby Theatre was announced, along with that of its Lower East Side neighbors the Palestine Theatre, the Charles Theatre (then Bijou), and Apollo Theatre, in November 1925.

Like those theatres, the Ruby Theatre opened in 1926. Seating was provided for 484 first floor seats plus 100 in the balcony, the theatre was closed by 1940 and was converted into an indoor market.

Turner Classic Movies recently televised the Bowery Boys feature â€œFeudin' Foolsâ€. Following the main titles there were two New York City â€œstock footageâ€ establishing shots. The first was that of the New York skyline and second was a street scene in which the marquee of the Ruby Theatre was clearly visible in the background. If I recall correctly, these same two shots were used at the beginning of a number of other Bowery Boys features of the mid 1950s.

I can confirm what the above post just wrote about the Bowery Boys features which have been shown on TCM, in fact, that’s why I was looking up the Ruby theatre on this site. The Bowery boys were once the “Dead End Kids,” then the “East Side Kids.” Since the Ruby Theatre was on the East Side, I guess that’s why the stock footage was used. All those movies were of course shot in LA.

I see that I’m at least the 3rd person drawn to this listing by seeing the stock footage of the Ruby Theatre at the beginning of the Bowery Boys movies that are being telecast by TCM on Saturday mornings. Oddly enough, I saw some of these movies originally at a drive in theatre in rural Tennessee, where rereleases of Bowery Boys movies continued to be popular through the early to mid 60’s. It was always a treat when they would have a Bowery Boys triple feature over the weekend. Haven’t seen most of these movies since then. Seems ironic that a high rise boutique hotel is now located on the site that I now connect with the Bowery!

thanks bbrown,I will try and catch the TCM Bowery Boys movies.

Finally caught the opening scenes of this past Saturday’s Bowery Boys feature on TCM and saw the Ruby marquee. Any idea when that scene was shot? The 2nd Ave. elevated train is in the background. Somethings remain the same.The water tower belonging to University Settlement continues as part of the LES skyline.

Was also drawn to this page based on seeing the stock footage used during the titles of the Bowery Boys' “Dig That Uranium” from 1955, as televised this morning on TCM. Given the passing bus in the foreground, and the comments made here, the shot was taken from the northeast corner of Essex and Rivington, facing west across Rivington toward Ludlow and beyond. The bus was part of the privately run Avenue B & East Broadway Bus Company, which may have had only one or two routes. Although the bus ran principally along Essex St./Avenue A, it was known in the neighborhood as the Avenue B bus, or simply the “red bus,” as this was its color to distinguish it from the city-operated green buses which evolved into the current MTA bus lines.I really don’t remember the theater, growing up in that neighborhood from the late 50’s through the mid-70’s. I do of course know the hotel referred to earlier in this thread, and I think the ground floor space was also for a number of years the site of the Ying Fong Chinese Restaurant, which later relocated to a storefront on Essex Street.

I remember watching the Bowery Boys films at the Lyric theater in Cleveland when I was very young. I loved them then. Warner Archives now has 36 of the films available on 3 vols. and a 4th one coming. This will make all the Bowery films available on DVD. Well, how else should I spend my money?

The Rudolph Wurlitzer Company shipped a small pipe organ, their opus 1376, style B, II/4+percussions, to “Rivington Theatre, NY” in the summer of 1926. Since the Ruby is a small theatre, on Rivington Street, and the only theatre of 3 on the street listed on Cinema Treasures as opening in 1926, seems likely that that organ was installed in this theatre. It’s a just a guess though.

Interestingly, this a pic of this theatre was used in the opening credits of a number of Bowery Boys films from the 50’s