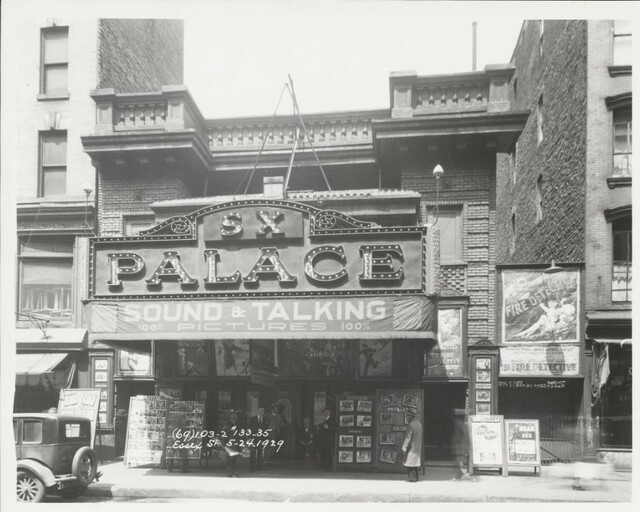 The Palace Theatre was one of the Lower East Side’s earliest cinemas, opening in 1906 as the American Motion Picture Theatre, under the ownership of Charles Steiner. The premises were converted from a livery stable, but Steiner’s profits eventually enabled him to renovate the place into a real theatre, which had been re-named Essex Theatre by 1914.

By 1926 it was known as the the Palace Theatre but it did not survive into the sound era. Charles Steiner continued to be an important force on the Lower East Side with interests in such theatres as the Palestine, Mecca, Ruby, Sunshine, and Apollo. He died in 1946 at age 63.

Steiner started his career at 133 Essex Street in March 1908. He converted his father’s livery stable into a 250-seat nickelodeon, which he initially ran with Alfred Weiss. In 1910, he also rented the adjacent building (135 Essex) to create the possibility to enlarge his movie theater. In 1914 both buildings were demolished to give way to a brand-new 600-seat theater which was designed by the architect Lorenz F.J. Weiher. The Palace Theater was part of the M & S Circuit.

After the theater’s shutdown the building became a restaurant: the famous Bernstein-on-Essex – the first and more many years only kosher Chinese in New York City.

The building at 133 Essex today has six stories. It looks relatively new. If the original theater building was a livery stable, I have my doubts as to whether it’s still standing.

There’s an older building at 135. It would depend on whether the 133 address is correct.

The Essex Theatre is listed in the 1914-15 edition of American Motion Picture Directory at 133 Essex Street, NYC, NY

The building I have in mind is a two story yellow brick building with orange brick stripes. A few years ago, there still was a large sign that read “Bernstein.” (I have a photograph of 1998 or so). At the time, the building was used for storage by a Chinese company.