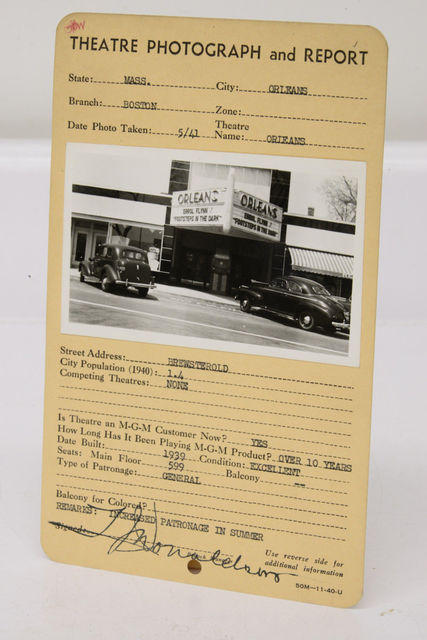 The Orleans Theatre was opened in 1936 with 599 seats. Independently operated for years by the Wilcox family. Taken over by Interstate Theaters and twinned. Taken over by Hoyts and closed in 1989. Now a CVS drugstore.

Does anyone know the year that this theatre shut down?

The 1927 Film Daily Yearbook lists one movie venue for Orleans, the Orleans Theater with 400 seats, open 2 days per week.

The Orleans Theatre was built in 1936 by the Wilcox family as a Stage/Movie Theatre. A single screen venue with 599 seats. In December 1969, the theatre was purchased by Interstate Theatres and renamed the Orleans Cinema. In 1977, Interstate twinned the auditorium 306/255. In 1988, Hoyts Cinemas purchased Interstate Theatres and ran Orleans seasonal only in 1988 and 1989, after which it closed and sold to a retail developer. The building was and still is leased to the CVS Pharmacy chain.

Does anybody have pictures of the inside of this cinema? Just curious.