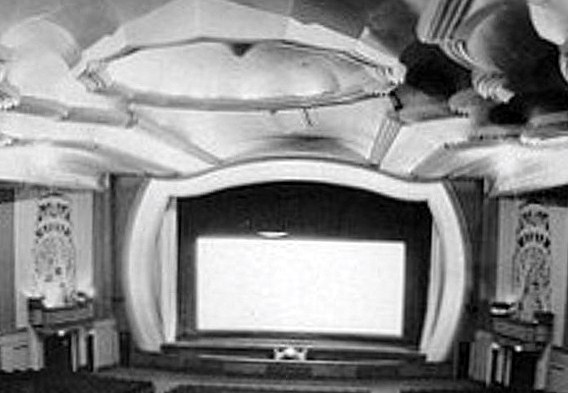 Seating was provided on a stadium style with the balcony being a raised area at the rear, rather than overhanging the rear stalls. The architect E. Norman Bailey designed a splendid example of 1930’s Art Deco style. The façade has touches of Egyptian motifs in the decorative ceramic tiles that cover the building. Inside the auditorium the decoration is made up of deep wavy plaster troughs which hold the concealed lighting in the ceiling and a unique proscenium opening shaped like a Chinese half-moon. Intricate decorative panels in a Chinese Streamline-Deco style cover the organ grilles each side of the proscenium.

The Regal Cinema was fitted out with a Compton 2Manuals/6Ranks theatre organ, a café and a ballroom.

It was taken over by Union Cinemas from December 1935, and they were taken over by Associated British Cinemas(ABC) in October 1937 and they continued to operate it through the rest of its cinematic life.

The Regal Cinema closed on 4th November 1977 screening Julie Christie in “Demon Seed” and Ron Leibeman in “The Super Cops”. The building was then given an immediate ‘spot listing’ and was Listed Grade II.

It stood empty for seven years until May 1984 when it was converted into Regal’s Nightclub which opened on 5th July 1984. Being a Listed building (raised in November 2000 to Grade II* status) and due to a covenant imposed when it was built, all features were retained in the building, including the Compton organ. Sadly though, the stage area was bricked in and separated from the auditorium and was converted into a gymnasium/health club. The connecting wires to the organ chambers were severed, so the organ is no longer able to be played and the console sits in the nightclub area, surrounded by empty beer bottles and crates.

In 1993 it became the Discotheque Royale, the interior was painted black/dark colours and because of the lighting gantry’s installed for the disco/nightclub it was difficult to see the original decoration as originally intended. But it was all still there…….and it remains one of the most important cinema buildings to survive in the London area and the U.K.

In April 2007 a 3million GB pound renovation was completed and it re-opened under new a name Liquid Envy Nightclub. The Compton organ console is now protected inside a glass box and is on display. It was closed in March 2020 due to the Covid-19 pandemic. In December 2020 the operators of the nightclub were made insolvent. The nightclub part of the building stands vacant & unused in December 2021.

We had Ross projectors here with RCA sound system.

Recently picked up series 1 of 70s UK police series The Professionals. A large portion of one episode, Look After Annie, was shot in the Regal Uxbridge at the end of November 1977, seemingly just a few weeks after it closed as a cinema. There are numerous interior shots of both the auditorium and dressing rooms, which is the setting of a political speech in the episode, as well as some exteriors to the rear of the building. Worth picking up the newly restored Blu-ray of this series just to see this splendid cinema before it was altered inside!

Malc1945.. your comment regarding the projection equipment is misguided.. The projectors were Westar with a Westrex sound system and Peerless arc-lamps.. at least they were during the 50s and 60s. A Zenon system may have replaced the Peerless arc-lamps after my time there.

What a wonderful proscenium. And looks as though it could have accommodated a ‘Scope screen without alteration. Any other unusual proscenium designs?

Wasnt the scene where Maggie smith plays the Theatre organ in “Private Function' filmed in this cinema. Liz smith played Mother and she’s sat on the Organ Stool at the side of Maggie Smith who says "we’re going up Mother!” The late Liz Smith has a bemused look on her face if I remember correctly