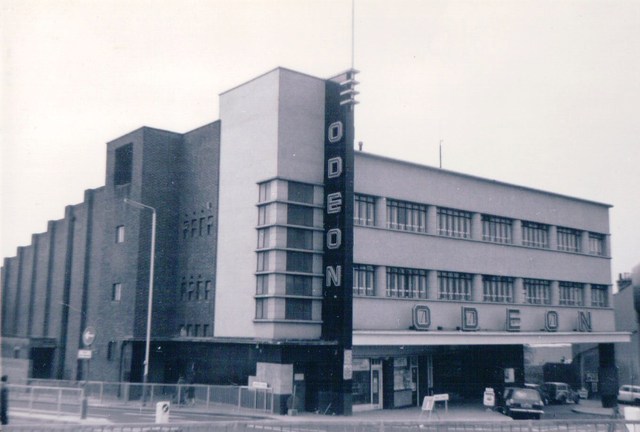 The Odeon Theatre opened on 20th June 1938 with Sabu in "The Drum". The cinema was located at the bottom end of the High Street at the corner of Harefield Road, away from the town centre. It was one of the original Odeon Theatre’s built for the Oscar Deutsch chain of Odeon Theatres Ltd.

Designed by Keith P. Roberts of the Andrew Mather firm of architects. The front of the building contained offices. There was a square tower on the left of the facade, which had a slender fin feature, containing the Odeon name. Seating was provided for 1,215 in the stalls and 622 in the circle. Indirect lighting in the auditorium was contained in three bands on each side of the proscenium and laylights in the centre of the ceiling.

The Odeon was tripled in April 1976, with 650 in the former balcony auditorium and two mini screens in the rear stalls, each seating 140.

The building was demolished in September 1984, and a new two-screen Odeon was included in an office development on part of the site, opening in 1990. This too was closed in 2001, in favour of a new 9-screen Odeon multiplex in The Chimes Shopping Centre on the High Street.

You could always smell the hops in this cinema as a brewery was in the car park.

Memory.. Question was this Cinema used in Carry on at your covenience ???

Yes it was & another

What was the cinema used for filming the movie “Carry on at your convience(the Wikipedia page for tne movie only mentions the Odeon Uxbridge)?

What other cinema i mean?