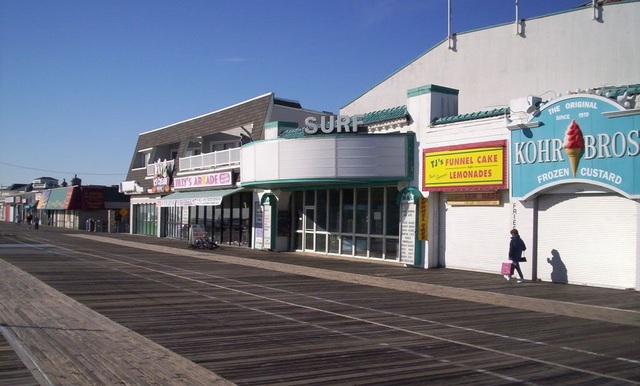 Opened in 1929 after the great boardwalk fire. Advertised as a fire proof building. The Showboat Theatre was originally vaudeville but then changed to movies by 1931 when it was operated by Hunt’s Theaters Inc. By 1941 it was operated by the Strand Theater Co. The Shriver chain operated the theatre in the 1970’s. It closed in the early-1980’s and is now an enclosed shopping mall.

I KNOW THE GAMBLING ISSUE IS A BAD MOVE FOR MANY AREAS OF PA. I GREW UP IN PA, LANCASTER COUNTY TO BE EXACT AND NO AMOUNT OF GAMBLING CAN DESTROY AN AREA ANY WORST THEN THE WAY LANCASTER HAS BEEN DESTROYED ALREADY. CRIME OUT OF CONTROL, HUGE DRUG PROBLEMS,CONJESTION AND SO ON. WHAT A SHAME FOR SUCH A BEAUTIFUL AREA. ALL THE DRIVE INS AND OLD DOWNTOWN THEATERS WENT YEARS AGO AND REALLY WHY WOULD ANYONE WANT TO GO TO DOWNTOWN LANCASTER AT NIGHT ANYWAY. TOO BAD THAT JOB AT THE SURF IN THE SUMMER OF 75 WAS IT. YES THE STRAND DID HAVE JAWS SHOWING THAT SUMMER. I HUNG THE BILLBOARDS FOR THAT MOVIE AND OTHERS THAT SUMMER INCLUDING ‘FUNNY WOMAN’ ON THE SIGNS WHICH WERE LOCATED ABOVE THE VILLAGE THEATER. MT

Far beyond simply being bad, casino gambling coming to Pennsylvania is unconscionable. Till now, casino gambling has only been located in remote places where most people don’t really live permanently, because trying to combine the two is totally impractical. And it’s not like Pennsylvania somewhere along the line completely lost it’s ability to provide people with a main place of residence. Or, its ability to be prosperous without the need to introduce gambling. I think, though, that it is very fair to say that Pennsylvania is now under a leadership that’s totally out of control, a renegade state government that is. For it’s not as though casino gambling is being debated on in Pennsylvania right now. Rather, it was voted into law two years ago by the state legislature with the citizens of Pennsylvania having no say about it whatsoever. Er, I believe that’s called “despotism”?

Now as for Lancaster, Pennsylvania, I wasn’t aware that it had gotten as bad as you describe, but at the same time I am not shocked at all at this point. In my mind I think of Lancaster being synonymous with the Pennsylvania Amish as seen in that Harrison Ford movie, “Witness” — which for the most part is just to show how much the media does create its own reality. Meantime, to the best of my knowledge, no casinos are being proposed for that vicinity. Rather, they seem only to be targeting spots in Pennsylvania that are doing very very well and where the thought of introducing a casino is proposterous. One of the most notable places currently being targeted is Gettysburg, home to the historic battlefield as well as the recently restored Majestic Theatre. The Majestic Theatre is where President Eisenhower went regularly whenever at home at his farm there. Of course there’s national outrage against a casino coming to Gettysburg, even drawing Walter Cronkite out of retirement, and the local citizens there are up in arms, but with the new Pennsylvania law saying a casino can be built there, it’s like there’s no law. That is to say, that is the new law, that and that alone.

Of course, the question, though, now is, how is New Jersey going to be impacted by this? For most of the casino-going traffic it gets now does indeed come from Pennsylvania. And it is that, moreso than anything else, that caused the Jersey Shore to change as much as it has since you were there last, and for it change for the worst the way it did, and which has firmly held it in that greatly worsened position ever since. But it could well be that Pennsylvania’s gambling, once it gets into full swing, could cause New Jersey’s currently thriving gambling industry to collapse completely. In combination with this, in today’s world there are those who for many years now have held onto the belief that one day the Jersey Shore could restore to what it had been previously — in many many ways it being the same as refuges from Cuba living in Florida today awaiting the death of Fidel Castro and the collapse of his regime so they can return to restore Cuba to its onetime glory once more. But whether that’s just wishful thinking on their part or realistic I don’t know. I know that for myself personally I gave up on Ocean City, New Jersey after everyone else did. But now with gambling coming to Pennsylvania I’m being forced to take a second hard look at it. For at least shell-wise, both the Surf and Strand Theatre buildings are still there.

As for Ocean City’s Village Theatre, I never went to it, while I see Cinema Treasures has it down as having burned to the ground in 1990. And from the looks of it it apparently was but yet another of the many arsons I mentioned in my previous commentary. And till now, seeing CT’s description, I never knew it was that historic! Aside from that, though, I still believe the Strand and Surf were Ocean City’s best theaters, and like I say, shell-wise at least, they are still there. But, where’s Ocean City itself going from here? For that’s the big question. And nobody knows the answer to that yet I don’t think.

Here is a 1929 postcard of the Showboat:
http://tinyurl.com/3anxkw

As always, thanks for the great photo link, Lost Memory! This particular photo looks to be straight out of a film noir movie…with a whodunnit clue perhaps offered up by that mysterious ladder silhouette at the upper right. Do you know, by chance, if the man who’s running this Surf Mall now is the same man who owned it when it was last a theater? In both cases it looks to be his style.

Thanks for the comments on my photo from Flickr! (Lost Memory Posted) The next time I’m over there I’ll try to get a daytime exterior shot, or perhaps interior.

Yes, it was a great photo, Mts83, though it would be cool if that building could one day be a theater again. But an awful lot would have to change for that to be, at least if the effort were to be successful. Meantime, it will be interesting to see the interior shots you hope to get the next time around.

As for the mysterous ladder silhouette in the last photo, suggestive of something you’d see in a film noir movie, it got me to wondering, how many movies were filmed on location there in Ocean City? I can name two, EDDIE & THE CRUISERS and TATTOO, the latter starring Bruce Dern, but any others? For with Ocean City once having been a vacation spot of choice for actress Grace Kelly and the actor Errol Flynn before her, you would think a lot of major films were shot there over the many years, though those are the only two I’m aware of.

I worked as a projectionist (occasionally) at the Surf in the late 1970’s, just before Shriver’s let go of the lease and Al Kazmark(?) then leased it for rock films.

When I was there, the theatre was owned by the Frank company but operated by the Shriver company. Unfortunately, the Frank company was not about to do any maintenance on the building when a competitor was operating it. So the roof leaked terribly and there were times when we would rope off the first 10 rows of seats because of standing water.

But the building was interesting. It was never meant to be a palace, but there was a very large stage with ropes and sandbags along with a very old dimmer panel. I remember those dressing rooms too. And the spotlight (MT). I remember playing with that too.

The projection room had a large fireproof battery room attached to it to provide clean power for the original sound system (long gone). And from the proj room you could walk through a door out onto the roof of the marquee. That was pretty cool. Start the movie and then check out the girls on the beach!

There was no air conditioning, but there were 2 or 3 very large fan rooms on the roof that exhausted hot air from the ceiling.. Those fan blades were giant.

Anyway, I included a little history of it on my web page:
http://www.moorlyn.com/Showboat.htm

Thanks for the memories!

The July 27, 1929, issue of Motion Picture News had this news about the original name of this theater:

“PHILADELPHIA, PA, July 25.— Hunt’s ‘Show Boat’ Theatre, Ocean City, N. J., erected by Camp & Co., of Philadelphia, in record time of 64 working days, is probably the first theatre in the country to be named for a picture. While Universal’s talking triumph did not open the new house, it will be an early attraction there. The ‘Show Boat’ is a 2000-seat house designed by Ritter and Shay, Philadelphia architects. It is equipped with De Forest Phonofilm.”The partnership of architects Verus T. Ritter and Howell L. Shay was founded in 1920 and dissolved in 1936. The Show Boat is the only theater I’ve found listed among their projects.

Joe Vogel – What a great find. I never knew who the architect was and I had heard stories that the building was constructed in record time, but I never had a confirmation of that. Thank you!
Jim Laymon

They showed a lot of Disney films in the late 60 to early 70’s when they closed.