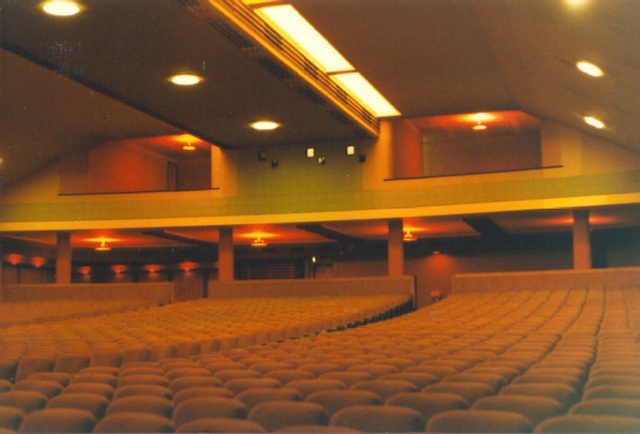 Although not much to look at today, the Strand Theatre on the Ocean City, NJ Boardwalk at 9th Street, was once a classic Art Deco style theatre with one screen, twin balconies, a silk curtain with King Neptune pictured on it, and backlit movie star portraits built into the lobby walls.

Opening on August 11, 1938, the Strand Theatre was built by William Shriver and was the flagship theatre of the Shriver Theatre chain in New Jersey. By 1941 it was operated by the Strand Theater Co. In 1989, it was converted into a five-plex without the original lobby (now a store).

The Strand Theatre was closed by Frank Theatres in 2013. In the summer of 2016 plans were proposed to convert the building into a pizza restaurant. It was gutted internally and the restaurant opened in spring of 2017.

Ah, what memories this photo brings back. I was one of the movie projectionists at the Strand during the Summer of Jaws (1975). Then, the next summer, I was not only one of the projectionists, but the janitor. Did I really sweep under each of those 1450 seats every night? Yes, I did! Those days were as much hard-working as they were thrilling, so much so that they merited an entire chapter in my latest novel. I was very privileged to have worked in such a glorious temple of cinema.

The Strand will be serving pizza next year…but not movies. Longtime Boardwalk pizzeria Manco & Manco is moving in. Announced in a Facebook post here.

Nice. Why not show movies on that H-U-G-E screen and serve hot pizza and other food?

Ribturtle, I must have just missed you. I was a projectionist at the Moorlyn in ‘77 and then at the Strand from '78 to '88. Our biggest summer must have been “ET” in 1982. We actually used the balcony a few times.

Philadelphia Inquirer reports today the Strand was gutted to be a pizza place. Marquee refaced. http://www.philly.com/philly/news/new_jersey/Jersey-Shore-Manco-boardwalk-pizza-prison-Ocean-City.html

Thanks to the Frank Theater chain, they ruined a great theater when they took it over from Shriver theaters and chopped it up into 5 screens. They also ruined all the theaters in Wildwood NJ. What a piece of crap theater chain. They were even worse when I worked briefly for them in 1975

Yes they sure did ruin all the Wildwood theatres. They ruin everything they touch.

I was visiting family here in the summer of'75. Jaws was sold out. I was so disappointed, wasn’t old enough to see Rollerball, so I had to settle for The Apple Dumplin Gang.

Markp Just saw your comment back to me in 2017. I was happy when they filed bankruptcy. They ruined everything they touched in NJ and Florida