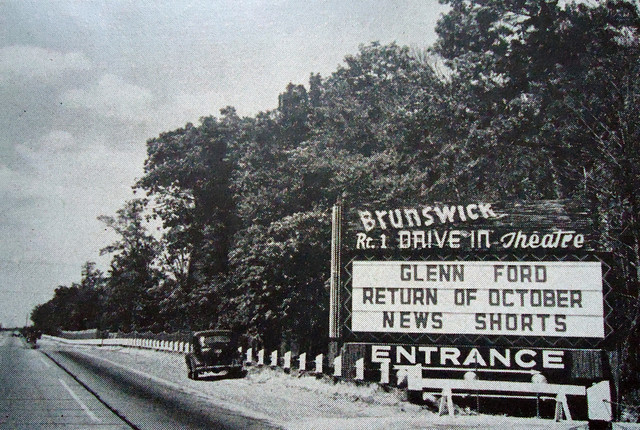 The Brunswick Rt. 1 Drive-In was opened May 19, 1949 with Dick Powell in “Rogues Regiment”. This drive was operated by Skouras Theatres and then by United Artists until it closed around 1983. A Wal-Mart sits on the site today.

The Brunswick Drive-In was part of the United Artists chain from at least 1976.

-I was only here once. We saw a great double feature: “Forbidden Planet” and “Planet of the Apes.” The place was falling apart around the edges. It was in 1980-81, I believe.

this grand old Drive-in that no one has written about since 2007; where are all you New Jersey theatre folks at.Parked 650 cars and was owned by J.J.Thompson.In 1956.

That was a very laid back-country type of drive in. The buildings were made to look kind of like log cabins if I remember correctly. It felt like you were out in the woods. If you blinked you would drive right by it. The locals knew the “back” way in in order to beat the traffic on rt. 1. I remember cars backine up on rt. 1 on big openings. Sadly missed…..Gary

I grew up in a house not more than a ¼ mile from theater. We use to hang out in a park that was right behind theater as a teenager. I remember this drive in as ours they use to let us hang out for free in back row of drive in, my brother worked there i use to get there early so he could give me free fries they had the best. The theater was a part of my best memories. Like alot of drive in movies theaters in that area there was a little playground for the kids. As the above poster says it was a log cabin style refreshment building that lol you could raise your hand as you walked by movie projection from building and see it on the screen, this drive inn movie theater like all the others i frequented in central jersey will be sadly missed!!!…….. john

I was going here all the time between March 1972 and May 1973, when I made the colossal mistake of relocating to California. Got out of there decades ago, fortunately. This drive-in was indeed easy to miss off of southbound U.S. Route 1. It was rather easy to sneak into when the need for this arose, we usually had one person drive the car in, the other two were going through the back fence.

During this period, I was there weekly, so maybe 60-70 times. Even in the dead of winter. Many times I went back to see the show twice. One of the most memorable movies I saw here was the Alistair MacLean spectacular actioner “Fear Is the Key” starring Barry Newman. This must have been in early 1973.

I was able to get a DVD of this great movie from the U.K. Film has one of the longest car chases ever in a movie, over 20-minutes uninterrupted. It was filmed entirely in Louisiana, but it was a British production. Highly recommended. The chase almost in its entirety is viewable on YouTube.