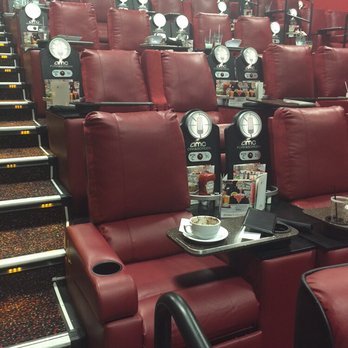 The history of AMC’s Fullerton location is a tale of three theatres. Opened on December 18, 1987 as an eight-plex, the theatre was expanded in to a ten-plex in 1992, and eventually a twenty-plex on May 16, 1997.

The initial addition was seamless, as two large auditoriums were added on to the existing structure. However, the mega plex expansion called for a second, separate, building to be constructed across from the original theatre, with two free standing box offices between the structures.

The resulting complex caused a host of logistical problems, most notably, the “bad side vs. good side” mentality among patrons. The original theatres, labeled “the classic side” by AMC, were/are standard 1980’s multiplex in design. The auditoriums, labeled “the stadium side” by AMC, were prototypical late-1990’s mega-plex. In addition to the two diverse styles, the Fullerton 20 was also plagued by a severe lack of parking, as the addition was constructed over a large portion of the parking lot. This problem was later corrected when another building on the property was purchased and demolished for parking.

The eight and ten-plex versions of the Fullerton theatre saw business levels that far exceeded the facility. Box office and hold out lines regularly stretched in to the parking lot, with the undersized lobby usually packed to full capacity. Yet, with the seemingly needed expansion to a twenty-plex, the facility frequently stood as more than the market demanded.

Today, the moderately successful Fullerton 20 stands as a unique piece of theatre history, illustrating the industry’s transition during the late-1990’s megaplex boom.

And if I’m not mistaken, the two additional “large auditoriums” were opened prior to 1992. I saw “Father of the Bride” there in 1991.

The complex, especially when it was opened in 1987, was fairly uninspiring. It was similiar in decorative features to the AMC MainPlace which opened earlier that year. But in my opinion, the MainPlace theatres (especially the big 70mm houses) were nicer. I don’t know if I’d call the AMC Fullerton classic, but it was more of an improvement over AMC’s previous fare, like the Orange Mall 6.

Pacific Theatres was planning a large megaplex on the site of the old Anaheim Drive-In, just down the street and off the 91 Freeway. AMC had expanded their Fullerton complex to 20 screens, but I’m not clear on the exact year. The first time I visited the stadium side was for the engagement of “South Park.” But I think that Pacific backed out because of AMC’s presence within such a small radius. A Lowes Home Improvement store sits on the site of the old drive-in.

The theatre had a “soft open” in December of 87'. I don’t believe the concession stand was completed until mid January of 88'. The expansion was in May of 97' (I was on the expansion management team).

this was the site of a stabbing that occured during a showing of a horror movie on the same night as the oscars.

Here is the story from the LA Times:
http://tinyurl.com/yssyjq

The suspect in the stabbing has been caught in Las Vegas. Police believe he may have been under the influence of psychedelic mushrooms during the stabbing.

Looks like Fullerton is about to enter it’s fourth incarnation, as the theatre will be undergoing a conversion to AMC’s “dine-in” concept this year. I’m unsure if the plan is for both sides or only the “classic” side, but they’ve posted the application for liquor license notice on both structures. I would assume the long vacant restaurant space, attached to the “classic” side, will be converted in to a kitchen. There is also a vacant coffee shop (prior to that an arcade) attached to the “classic” side; perhaps, they’ll convert that to a lounge or bar. Both the restaurant and coffee shop units are part of AMC’s lease.

“The Rocketeer” was presented at the AMC Fullerton 8 in 35mm Dolby Stereo beginning on Friday June 21, 1991.

The first case of measles in this area came from someone who went to see avengers endgame opening weekend. Since then it has been checked every day.