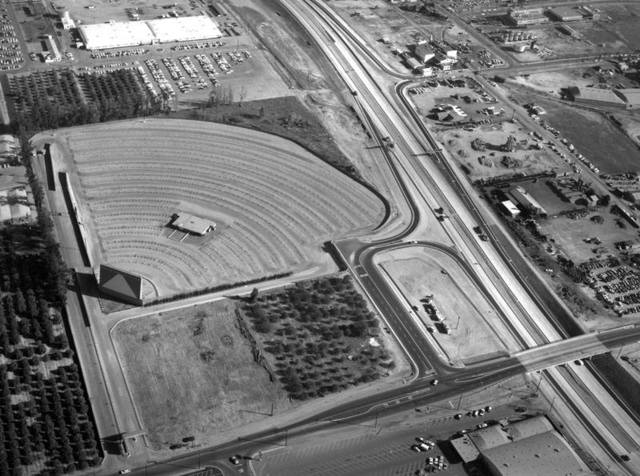 The Anaheim Drive-In opened two weeks after Disneyland on August 3, 1955 with Sterling Hayden in “Shotgun” & John Derek in “An Annapolis Story”. It was operated by Aladdin Enterprises and was Orange County’s fifth drive-in and was advertised as “Another famous Anaheim entertainment center”. The Santa Ana Register said that the $350,000 drive-in, built by Aladdin Theatres, had a 2,000 car capacity and a snack bar that could serve 500. It had a 90x120 foot screen.

It later became a Pacific Theatre and two more screens were added in the 1980’s. In its later days it served also as a swap meet until it played its last movie on March 26, 1990.

There were once plans to develop theatres on the site until 1997 when AMC Theatres expanded their small nearby multiplex into a 20-screen stadium, so Pacific Theatres built a shopping center anchored by a Lowes store.

Regarding the Grand Opening ad on the link above: What element would make a drive-in theatre “Luxurious”??

Here is a story about the demise of the drive-in from the LA Times, dated 9/6/96:

In its heyday four decades ago, the Anaheim Drive-In Theatre on Lemon Street drew couples on dates, friends out for an evening of fun and families with pajama-clad children who parents hoped would watch the cartoon, then snooze through the feature film. The outdoor theater next to the Riverside Freeway stopped showing movies in 1990 because attendance had become so sparse. The main attraction since then has been weekend swap meets. Now, the drive-in is being razed to make way for a 25-screen cinema complex. The old marquee fronting Lemon will remain for now to announce the opening of the cineplex, to be completed by May.

“There’s a building boom among all the movie theater chains right now, and we are pleased that Anaheim is getting its share of new projects,” Mayor Tom Daly said. “Central Anaheim needs movie theaters, and we’re hoping that this will fill the bill."For several weeks, workers have been breaking up the pavement where moviegoers once parked their cars on the 22-acre site, owned by Los Angeles-based Pacific Theatres. To mark the beginning of construction for the cineplex, company officials will host a "screen dropping” ceremony at noon today. The public may watch the demolition of the drive-in’s original 122-foot-wide, 96-foot-tall screen, the only structure left on the site.

Pacific’s other Orange County drive-ins, in La Habra and Buena Park, have also closed in recent years. In La Habra, a Super Kmart store was built on the site, and in Buena Park there are plans for 220 houses at the former drive-in. The county’s few remaining drive-ins will disappear soon too. A retail project is being proposed at the Highway 39 Drive-In location in Westminster, Pacific officials said. Pacific’s Orange Drive-In is still open as a swap meet only.

The Stadium Drive-In on Katella Avenue in Orange is scheduled for conversion to a multiscreen cineplex by Century Theatres Inc. and Syufy Enterprises, both of San Francisco. Chan Wood, Pacific Theatres' executive vice president, said moviegoers' tastes have changed over the years, bringing an end to the drive-in era. “They want better sound, presentation and amenities,” Wood said, which drive-ins can’t offer.

The new Anaheim complex will have a total of 5,500 stadium-style seats, a lobby with three snack bars and 2,000 parking spaces, Wood said. Three restaurants, a food court and a fun center with games are also planned. Wood said drive-ins are also disappearing because they are on large, valuable commercial parcels. “Most of our properties are at prime locations,” he said.

I was a manager at AMC Fullerton when Pacific was “planning” the Lemon street complex. While Fullerton’s exansion (opened May 97') was usually cited as the reason Pacific’s build fell through, I always suspected there was something else involved.

Pacific had announced their complex and begun preparing the property before AMC even finalized their exansion plans. Yet, over a year long period, the Lemon street lot never progressed beyond demolishion of the drive-in facilities and a “comming soon” advertisement on the old marquee. By the time AMC broke ground for their expansion, the Pacific site had been sitting, devoid of activity, for a considerable time (i.e. beyond dragging their feet, Pacific’s project had been “dead in the water” almost from the start).

In addition to the lack of notable effort on Pacific’s part, one has to question why Pacific’s planned 25 screen new build would have even felt threatened by the Fullerton complex, stadium addition or not.

In the end, there must have been more to the story.

Here is a 1972 aerial photo:
http://tinyurl.com/yduuzyv

Although the drive-in’s grand opening ad listed its address as 1520 N. Lemon Street (just off Orangethorpe), the 1960 photo and 1996 LA Times account verify davidcoppock’s note that it was where the Lowe’s is now, so a better address would be 1500 Lemon St.

As with many of the drive-in’s converted from 1 to 3 screens sometime in the ‘70’s.