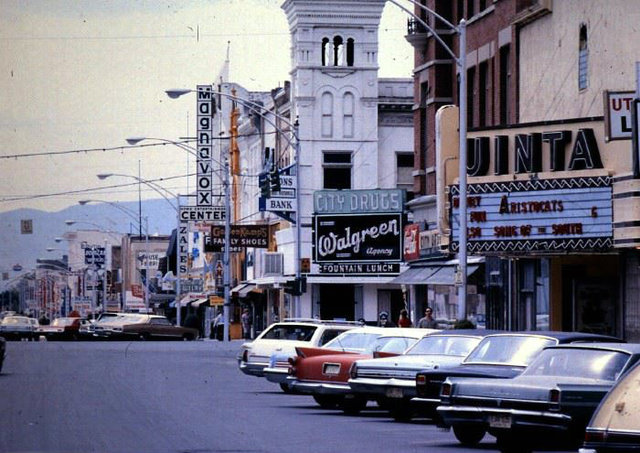 The Princess Theater was opened January 1, 1912. It was built by John B. Ashton for $25,000 and originally had 550 seats. On October 19, 1930 it was renamed Crest Theater. On November 6, 1936 it was renamed Uinta Theater. It was a cozy little theater, smallest of the 1960’s and 1970’s downtown theaters. Didn’t have a true balcony. It also felt more like a theater than the “big” one. By the early-1940’s it was operated by Paramount Pictures Inc. through their subsidiary Tracy Barham.

Fell victim to the arrival of multi-screen facilities in happy valley. Destruction coincided with the elimination of the retail importance of downtown. How unique. Staffed, as were the others, by BYU students, mostly working part-time. If the employee was a local kid, you could tell by the surly attitude. The smallness, grimness, etc. of the three theaters most available to BYU folk was the reason I took dates as often to Salt Lake City’s former array of great movie palaces as the local places.

It was demolished in October 1991.

Of course if the date was really promising,you took here to the lovely Pioneer Drive In.Also you had the option to head to the Art City Drive In, or the theater in downtown Springville.For real adventure,you could take your life in your hands and head to Spanish Fork.The locals there did NOT like BYU people.

I guess by ‘60s or '70s downtown theatres, you mean by popularity. The theatre itself was a lot older than that, originally known as the “Gem.” Part of the streetfront had been the “Gem Sweet Shop” with a door to Center St. At some unknown date, a large door had been cut into the left wall of the Uinta lobby into the Sweet Shop and it became the concession stand of the Uinta and was closed to the public (except for ticket-buyers, of course). This is what I was told by the employees when I was the manager of the Uinta in Plitt’s days in 1977.

Surly local kids huh? SURLY! I beg your pardon. I was one of the local kids there mid to late 60s. We had few if any BYU (zoobie) students working there. Pretty much all high school kids, local, surly high school kids. And actually we were a very pleasan bunch.

The Uinta “did” have a balcony. usually closed because local fire codes demanded there be an usher up there if it were open. We were usually glad it was closed. On our breaks and after our shifts there were a lot of memories made in that balcony.

It, like the Paramount, a couple doors down, also had some dressing rooms. The stairs to which had long been boarded up. We discovered them by leaving from the projection booth and walking along the rafters, old rickety rafters, to the north end of the building. There was a hallway and two dressing rooms. There were trunks full of old musty costumes and misc. other things that really didn’t interest us kids at the time. I also remember tear shaped glass balls with liquid in them haning on the walls. We thought they were some kind of decoration, but later found out there were a form of fire extinguisher mate to explode when exposed to flame.

another find in our exploring were boxes of old silent film in the attic outside the projection booth. I remember the projectionest telling us they were silent as they didnt have a strip along the edge that contained the sound track in later movies. He would not try to project them because he said they were so old they would probably burst into flame if he tried to run them in his projector which was like a big arc welder. Welding rod, flame and all. He drank a lot, I guess night after night of sitting through “The Sound of Music” would do that. That also explained why occasionally, when he would doze off, there would be a break in the movie as he would miss the que, as it came on the screen, telling him to strike up the second projector.

Those were great days, but Surly ? Come on zoobee, you were just a typical uptight Zoobee. Should have gone to the “U”.

I have never found a picture of either the Paramount or the Uinta. Would sure like one. If anyone has one you can send it to

And if any of those surly kids in the red monkey suits are in the picture, even better.

I typed the previous rant in the middle of the night. For which I must apologize, especially to zoobees for a few spelling errors. and a corredtion in my email address;

I worked at the Unita and Paramount in Provo while I was going to BYU. It was the greatest job. It was small and forced the staff to really inneract. We even, so many years later, stay in contact with a few people. We really believed that the two theaters were haunted and seemed to see “things” out of the corner of our eyes. We often found old posters and pieces of movies in the rafters. I was working there when the above pictures were taken and remember those movies will. I placed the letters for “splash” on the sign myself. In the winter it was interesting to get the the letters up there when there was snow on the ground.

Hey,Bruce,were you working at the Uinta when Rosemary’s Baby was showing? Provo lost a whole lot when the Center St.Theaters were lost. According to Smith’s UTAH THEATERS website,there was once a large theater further West on Center,but it disappeared,I guess,in the 50’s.

I remember going to the movies in the 50s when the Paramount, Uinta,and Academy theaters cost 14 cents for a ticket. We went one day to the Strand, which only cost 9 cents. I was so excited to have saved a nickel. The bad part was that I lost my nickel and spent the whole time crawling along the floor trying to find it. I missed the movie and lost my nickel!

The obituary of John B. Ashton in The Salt Lake Tribune of November 12, 1941, said that the Uinta Theatre had been opened by Ashton as the Ellen Theatre. The obituary didn’t give a date, but the Ellen Theatre was being mentioned in theater trade journals in the early 1910s. I believe the Ellen predated Ashton’s larger and more ornate Princess Theatre, which opened in 1912.

It appears that the newspaper obituary I cited in my previous comment was wrong about the original name of this house. The NRHP nomination form for the Provo Downtown Historic District says that the theater at 25-27-35 E. Center Street was originally the Princess Theatre, also built by John B. Ashton.

The building was still standing when the form was prepared in 1977, but had been altered, what remained of the original facade with its ornate arch having recently been covered by an aluminum false front.