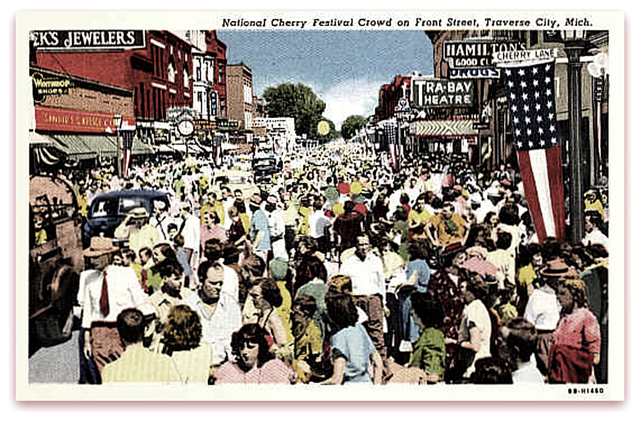 The Tra-Bay Theatre on Front Street opened in May 1935, in a building which originally housed the Dreamland Theatre. By 1941 it was operated by Butterfield Michigan Theater Co. Seating was provided for 700, and it was operated by a subsidiary of Paramount Pictures. The theatre has since been razed, and a sports bar built on the site.

From the 1940s a postcard view of a huge crowd filling Front Street and celebrating the National Cherry Festival. Also captured in the image is a view of the Tra-Bay Theatre in Traverse City.

The Front Street locale was home to the first entertainment space designed in Traverse City for the showing of moving pictures called the Dreamland Theatre. The space also had vaudeville. Though attributed the George Lote Silver as the original owner, he and his family were the third operators coming aboard in 1910. The regular feature films stop in 1926 and the building is home to a photographer in the early 1930s. W.S. Butterfield Theatre Circuit (part of the Publix-Paramount operation) reimagines the property creating the all new Tra-Bay Theatre opening in May of 1935. The 700-seat theater joins the Lyric as Butterfield’s Traverse City theaters to be joined in 1941 by the Michigan Theatre.

The Tra-Bay ends quietly on August 2, 1954 just shy of its 20th anniversary closing with “On Top of Old Smoky” and “ The Glass Wall.” The theater apparently sat vacant until purchased by Butterfield as a clearance sale room for Milliken’s furniture in November of 1955. The building would be swapped for another property with longtime Tra-Bay neighbor, Hamilton’s, to expand that clothing store into the Tra-Bay in 1958. The theater is dismantled. At that point, Butterfield Theatres returns but only to remove its projection equipment and donates it to the Traverse City State Hospital which had 1923-era antiquated projection equipment. Though the Tra-Bay building would be razed, that address on Front Street will be remembered for providing around five decades of entertainment for Traverse City residents and tourists.