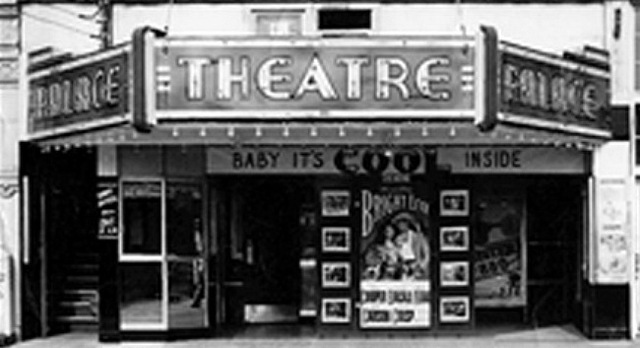 The Queen Theatre in Greenville, Kentucky opened as a vaudeville and silent movie theatre around 1910. It was later renamed Palace Theatre and survived as a movie theatre until 1970. After closing, it was briefly used as a wrestling arena.

In 1983 the Palace Theatre was purchased by the Muhlenberg Community Theatre Inc. In 1998 the theatre received major renovations and re-opened February 25, 1999.

The Film Daily Yearbook;1950 edition gives the seating capacity of the Palace Theater as 466.

The Palace building was constructed in 1901, according to the NRHP listing for downtown (which also says it was known as the Queen, and that it operated into the ‘70s). It didn’t open until sometime after 1910, when the map shows a dry goods store occupying the entire structure. The 1923 map shows the theater sharing the building with a bottling plant. The address for the building appears to have been 121-123 vs. 119-121 in the '80s when the listing was written up, but the 1923 map shows the address as it is today.

The pictures from the NRHP listing show the building in very rough shape, with the marquee gone and the theater entry paneled in that metal-edged formica stuff. The original doors are still there. For whatever reason, the ticket booth and entry were destroyed by an ugly remodel sometime afterward, and the 2008 streetview shows a really depressing facade with a chintzy flat plastic marquee. By 2014, this had been replaced by a reproduction of the one shown in the photo above.