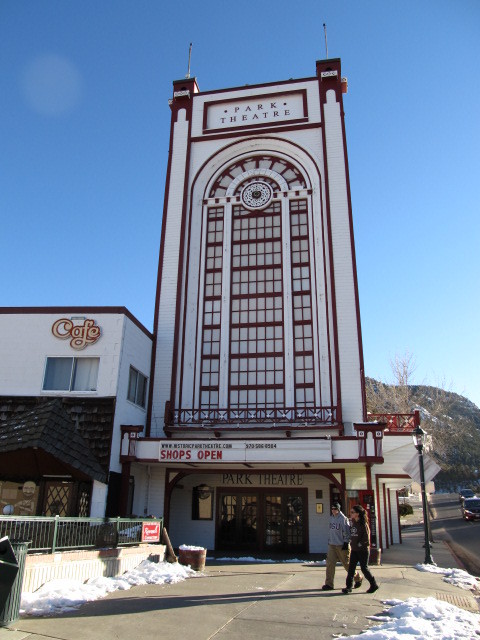 The Historic Park Theatre is the oldest theatre west of the Mississippi River that was built as a motion picture theatre that is still operating Film Productions.

The Park Theatre was constructed by J.L. Jackson in 1913. It was completed by C.H. Bond in 1914/15. Bond sold the building to Fred Jackson, who operated the theatre until 1922 when he sold it to Ralph Gwynn. Gwynn added the landmark tower. This tower is termed the “Tower of Love”, because Gwynn built it representing the beautiful love of his life. Gwynn operated the theatre until his death.

The theatre has been operated since 1968 by long time locals Ola and Richard Stanger. The Stanger’s purchased the theatre in 1982 from Vic Walker and saved it from demolition, by having the theatre placed on the National Register of Historic Places in 1984.

This family run and operated historic theatre looks forward to having you as our guest and as a part of our future history.

Estes Park’s first ever film festival took place at the Historic Park Theatre September 15th - 17th, 2006. In addition to the numerous independent films shown at the festival, the Estes Park Film Festival also served as a fundraising event to help raise money to restore the Park Theatre to its original elegance.

Interesting story….thank goodness it was saved!

As was that TALL tower!

The Historic Park Theatre in Estes Park is the oldest continuously operated motion picture theatre in the USA. The auditorium has 224 vintage seats, a 12x24' screen, and a Motiograph AAA 35mm film projector. The tower is 65' high. See the web site for further information: www.historicparktheatre.com

Would love to see a lobby photo and read what the tower is used for then and now.

The Architect was Clyde Anderson from Longmont Colorado. He design and cut the pieces for the building at his business on 2nd and Main in Longmont. Anderson Manufacturing and Building Supplies, Later to be called Anderson Tools.

Chuck, I think you might have mistyped the link: this one works for me.

Patsy, the article about the theater’s being saved from the 2009 fire is retrievable from the [Reporter-Herald archive](http://www.reporterherald.com/archivesearch], but there is a fee.

I have been to several special events recently including Broncos games, The Living Dream, and the Silent Film Festival with Scott Wilseck and always have good fun. The films included were Charlie Chaplins last in that series in 1917, The Adventurer and Buster Keaton’s first independant film, One Week, from 1920. Pretty cool venue. Scott matched the timing of the movies very well and entertained in between. Thanks!