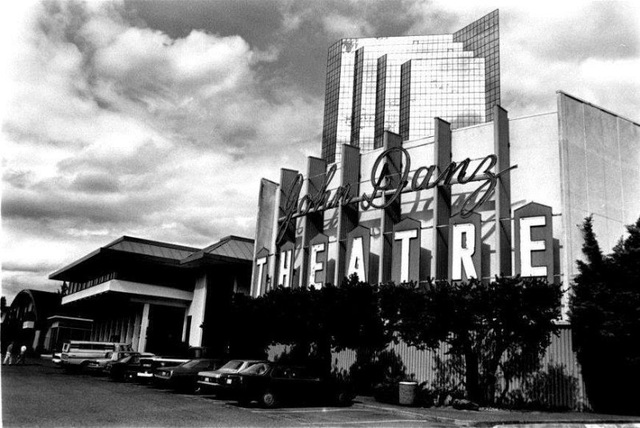 The John Danz Theatre was a gem of the Danz family empire, also known as Sterling Recreation Organization (SRO). The theatre opened in 1962 and closed in 1990. It became a Good Guys! store in the early-1990’s, and it ended as a Good Guys store in late-2005. It became a furniture store and by 2016 was in use as a church. SRO – which now stands for Sterling Realty Organization – still owns the property and has its offices on the top floor of the building.

The theater is named for John Danz, an early Seattle film exhibitor. His son, Fredric, turned his dad’s moviehouse business into SRO (which owned about 110 theaters on the West Coast in its mid-1980s heyday).

That is what going to the movies was all about.Great picture Ken Mc.Those were the good old days,but they were numbered.So much so I got out of the theatre business in 1983. I saw all these stinking Huge Multiplexes coming.

Also a theatre like this needs a lot more writing done on the history and theatre stories from employees and patrons.

The last Sterling house I worked as an IA operator was the Lynn Twin. I met my wife there. Next month we will celebrate our 42nd anniversary. The Lynn Twin (in Lynnwood) is now a non-profit storage facility last used as the Lynn Four.

I remember going to see Star Trek II there on opening day. There was even a laser show before the movie! Combining that with playing Zaxxon next door at the Belle Lanes just before the movie start and it was a perfect teenage geek’s day :)

I worked at the John Danz Theatre during my senior year at Sammamish Highschool in 1961-62, as well as during part of my first year at the U.W. Years later I realized after reading Bill Gates autobiography that since Bill was about 8 years old in 1962 and living in Bellevue, I likely tore his ticket when he came to the theatre with his parents. Note the spelling: “theatre” not “theater”.

Of course it was “Theatre not Theater” that’s to class it up a bit.

One of the nicest features about working at the John Danz as an IATSE projectionist was the fact that the building was partially built into a slope. At the rear of the theatre was a door that led directly into the booth with only 3 steps up. Also, a reserved projectionist parking spot next to the door.

Drove by what is now the Doxa Church the other day. One would never know this was a former cinema theatre based on it’s current incarnation. Both the exterior and interior have been stripped on all artifacts which one would equate with a cinema and replaced with…nothing. The sanctuary resembles a cheap music hall with bare black walls.