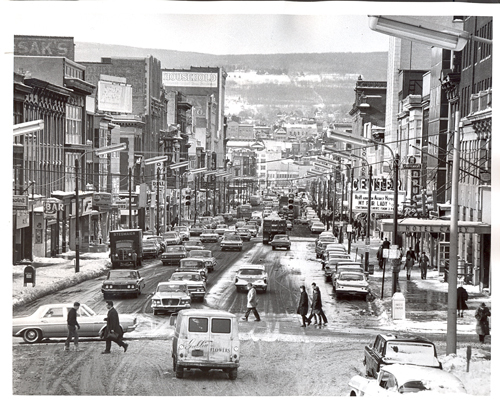 The Riviera Theatre was opened on December 6, 1928 with Colleen Moore in “Lilac Time”. By 1941 it was operated by Paramount Pictures Inc. through their subsidiary Frank Walker.

The theatre was remodeled by architectural firm Rex Craft Associates, headed by architect C.E. Gayeski. It reopened as the Center Theatre on October 6, 1960 with Charlton Heston in “Ben Hur” presented as a roadshow presentation. In the early-1970’s it was operated by the Scranton based ABC Theatres chain. It later went over to screening X-Rated movies and closed in the 1980’s.

The organ was taken out in the early sixties and it is my understanding that the theater was torn down shortly afterwards
The organ went into storage for a number of years and was at one time owned by Joe Patten of the Atlanta Fox theater.
The organ is now installed in the Rylander Theatre in Americus Georgia. The organ was a Moller style 70 which was 3 manuals and 7 ranks, the Style 70 organs however where prepared in the console and relay for an addition 4 ranks. When the organ was installed in Americus the additional ranks were added making it a 3/11
also the tuba was extended to 16' pitch. The blue prints of the organ do not reveal very much about the theater

The December 29, 1928, issue of Motion Picture News said that the Riviera Theatre at Scranton had opened on December 9. The 1,500-seat house featured a “…Spanish type of architecture….” and had cost $300,000. It was operated by the Comerford chain, and was the first theater in Scranton to have been built specifically to show talking pictures. The first feature presented at the Riviera was Lilac Time,, with Colleen Moore, and the opening night program included an organ recital by professor Lawson Reid.