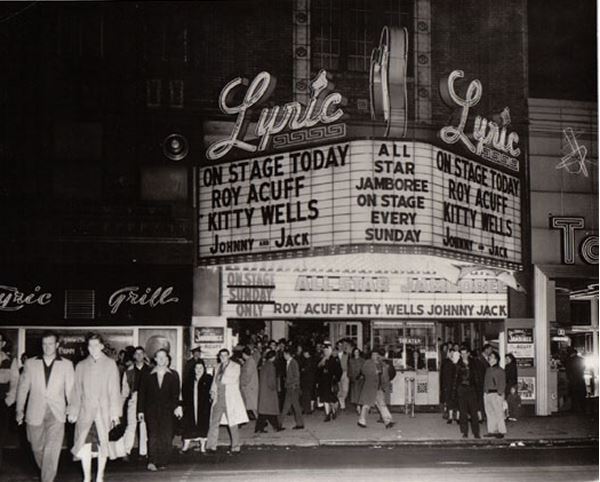 I am wondering – at which theater “Gone With the Wind” make its Indianapolis premier?

My Mother Kathy Hodges (Norris) worked at the Lyric makeing out the checks for the stars who performed there sometime in the 1950’s. I have a few photos of hers that I think were taken at the Lyric of Farren Young and Ray Price. Mom was asked if she wanted to go out with a man named Elvis Presley at the time that he sang there in 1955. She told me that she declined because of the sound of his name. I wish that I could have seen the Lyric at the time she worked there.

I saw South Pacific at the Lyric in 1958. The interior had been redecorated and a lot of plastic flowers with lights beneath them decorated the front of the orchestra pit. Looked kind of tacky.

Many thanks for the history of the theater you’ve presented here. I used much of it for a page for Scotty Moore’s website today about his appearances there with Elvis in 1955 http://scottymoore.net/indianapolis.html I would very much like to see the pix pauln32 has of Faron Young and Ray Price there. Send me an email if you would. Thanks again

Hi Jimroy, I also found a picture of my Mother with Carl Smith backstage at the Lyric. I’ll post or get them to you a little later this week. —Paul

Thanks Paul. My email is at the bottom of each of the pages on Scotty’s site too if that helps, just click on my name.

Yeah Stephen. Most of that is from the Historical society I believe. Had it up here for awhile now http://scottymoore.net/indianapolis.html Check out Paul’s pix too. Thanks.

The ad carries a small plug in its banner saying “where the crowds go” and it gives the theatre hours as 12:30 to 11.

The June 14 1929 Reading (Penn.) Times says the picture was a thrilling melodrama of the secret service, staged on the high seas and featured talking, music and sound effects. Typically, theatres in the 1920s and 1930s featured both live vaudeville and a film, and that is the case here.

According to the March 16 1932 Altoona Tribune, Anna Querentia Nilsson’s career began in one and two reel comedies for the Kalem company 20 years previously. She was in “countless” films, but mainly remembered for the 1923 “Panjola.” She broke her hip and returned to Sweden, and seems to have been trying to make a comeback in 1932.

Hmm. I should have used Google more effectively. I found the same picture on Scotty Moore’s web page, where he dates it March 23, 1929.

Now a parking garage and retail on the first level.