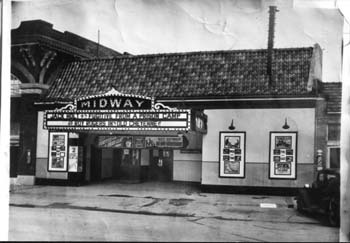 The Midway Theater opened in 1922 in the Oak Cliff section of Dallas on Jefferson Boulevard near Beckley Avenue. It had 550 seats and a Barton 2/6 Organ. The instrument was moved in 1931 to the new 2,000-seat Texas Theater, down the street.

The Midway Theater was operated by “Uncle Mac” McHenry and later in 1948 by Robb & Rowley Theaters.

It converted to talkies in 1933. It was closed in approximately 1970. The building now houses a Mexican restaurant.

My father managed the Midway while I was growing up, circa 1946-48. It was one of those wonderful movie houses around the advent of television which changed its double-feature bookings three times a week. I helped my Dad make out his booking sheets, a practice which, paired with my attendance at virtually every program shown there, led to my life-long obsession with movies of all sorts. (I followed in his footsteps twenty years later, when I managed theatres for the Laemmles in the Los Angeles area.) I finally tracked down a photo of the Midway at Oak Cliff’s Ice House Museum—I think I have this name right—recently. Dad also worked at the Texas, down the street, and a few of the other Robb and Rowley houses nearby, as well as “moonlighting” at Phil Isley’s Crest Theatre elsewhere in Oak Cliff. (It was at the Crest that I experienced my first horror movie, the Claude Rains “Phantom of the Opera,” which literally kept me awake all night!) The Midway is part of my heritage, and I would welcome any correspondence about it, accordingly.

According to a 1956 article in “Box Office” the Midway closed on September 23, 1956. It was built by R. D. Sudderth, an Oak Cliff Banker; then sold to “Uncle Mac” MacHenry; then to Robb & Rowley and finally Rowley United.

BJohnston, I can’t be sure, but I just know I remember seeing the Midway advertised in the movie listings of the Dallas papers well into my teen years, which began in 1967. Could it have re-opened after 1956 under new ownership, perhaps?

Google-Maps shows this to be called Las 4 Milpas

THIS “After” Photo is kind of a “After” photo to the original photo seen on cinematreasures.org.. Hince, Before & After….. Enjoy! Randy A Carlisle – RAC Photography

I remember seeing “hellzapoppin"on the marque at the Midway about 1942 and I think I saw "Road to Morocco” also in 1942. I was 11 years old and visiting my sister. She lived right behind The Midway theater on Centre St. Bill Barnes

There was a very short alley between Centre St. and The midway Theater on Jefferson. I could run right up the alley and be at the theater. Of course, my sister always gave me the money to buy my ticket, bless her! Bill Barnes