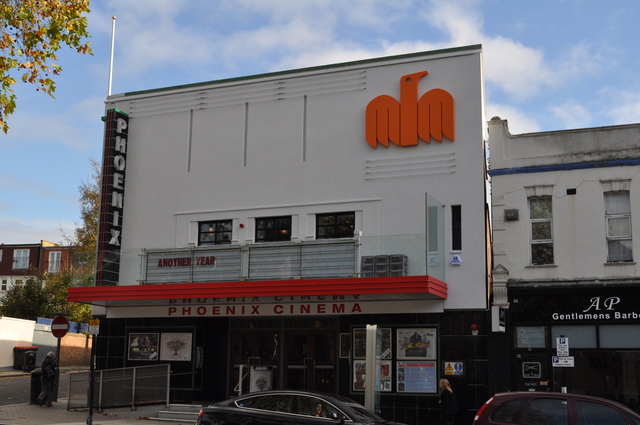 It was opened as the East Finchley Picturedrome on 11th May 1912 when “The Ill-Fated Titanic” was screened for 3-days. The screen was located at the front end of the building, behind the Moorish style façade and seating was provided for 428 on one floor. There was also a café.

In 1925 it was taken over by new owners, re-named the Coliseum Cinema and after refurbishment it re-opened on 25th January 1926.

Taken over by another Independent operator in 1936 it was re-named Rex Cinema and on 27th June 1938 plans were approved for extensive changes to the building by architects Howes & Jackman with internal decorations by Mollo & Egan. The auditorium was totally reversed with screen transposed to the other end of the building (as in normal cinemas) and the floor was given a new rake so that the highest end is now at the front entrance end of the cinema. The original 1910 Edwardian barrel vaulted ceiling was retained, but to add to the modernism of the 1930’s the side walls were treated to a display of 14 wonderful Art Deco panels by interior designers Mollo & Egan. A new projection box was built over the foyer and the façade of the building was given an Art Deco style, a new marquee was added as well as stylish neon letters spelling out the name ‘REX’. It was re-opened on 12th September 1938.

Several other independent operators had control of the building over the years and even the mighty Granada Theatres chain took over for a brief period from October 1973 until the end of 1974. It was taken back by Independent operators and became North London’s premier art house cinema. Demolition was threatened in 1983 for an office block to be built on the site, but the Rex Cinema and its supporters put up a brave fight and won the battle.

Eventually in 1985 ownership was passed onto a Trust that was set up to operate it and under the newly formed Phoenix Cinema Trust Ltd. (a registered charity) the cinema was re-named Phoenix Cinema. In 2001 a renovation programme was begun to refurbish the Phoenix Cinema.

London’s Time Out listings magazine nominated the Phoenix as #6 in London’s Top Ten Cinemas in 2001 and The Guardian newspaper’s readers voted it 9th out of 10 ‘Favourite UK Cinemas’ (the only London cinema to be in the Top Ten). It was closed in the Summer of 2010, to receive a 1 Million GB Pounds Lottery Funded restoration.

The Phoenix Cinema was given a Grade II Listed building status by English Heritage in December 1999.

Ken, I love that last photo, close up of one of the Art Deco panels on the auditorium’s side walls. If the panels are different, please photo & post the others!

2007 view of Art Deco grille near the screen:
View link

Beautiful photo of auditorium in this article:
View link

The musical movie “Nine” a scene in the auditorium, with the Art Deco panels on the side walls on view.

A wonderful picture of the cinema when it was the Rex in 1960. OK, so the cinema isn’t wholly in view, but the overall atmosphere; the cars, trolleybus wires and East Finchley Station Northern Line bridges in the distance, is just as I remember it in the late 50’s when mum took me to see Clamity Jane and Carousel. Thanks to LostMemory for posting – I wonder if there are any other photos from this period?

article with neat photo of auditorium

Will stay independent, not be part of Curzon, because people want it independent! https://www.theguardian.com/culture/2018/nov/03/protests-prompt-phoenix-cinema-to-drop-curzon-takeover

The Phoenix, exterior though with current look including Phoenix sign, and the auditorium wonderfully features several times in TV' The Durrells in Coru season 4 episode 4 which is set in 1939.