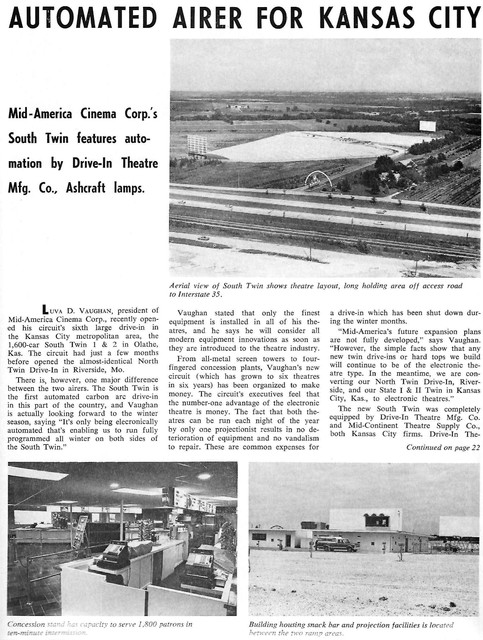 This was once a drive-in that was in northern Olathe that stood just a few hundred yards south of where the AMC Studio 30 is now. The exact location is where the old Rhodes Furniture was. This drive-in was a part of Mid America Cinema which owned various drive-ins and cinemas around the Midwest. The marquee looked almost exactly like the twin in Independence, MO with the exception of having a “South” sign on top of the “Twin” sign and was one of four drive-ins in the Kansas City are that featured this same marquee and was one of five drive-ins in the Kansas City area that had the St. Louis Arch replica. The other drive-ins that had the blue marquee with the St. Louis Arch were:

The other one that featured the Arch was I-70 Drive-In in Kansas City, MO.

Another thing that was common between the Mid America Cinema drive-ins were the white with colored brick concession stands, a playground, and screens that measured 60 feet x 120 feet.

From how the drive-in appears on the TOPO map, it appeared to have a capacity between 1200-1400 cars.

If you have any other facts, corrections, or comments on the drive-in, please leave them below.

It was still opened in 1982,I saw RAIDERS OF THE LOST ARK there.I dont remember what the second feature was but the third was VICTORY with Sylvester Stallone. Also the intermission at these drive ins showed footage of the north twin. Does anyone know if its available on DVD. These were well maintaned theatres that featured first run entertainment in a family atmosphere. I have many fond memories especially of the state twin and I miss them all.

I believe the South I & II drive in opened in June 1970. I can’t find any ads in the newspaper for it prior to then. Saw a lot of movies there, the last being Dressed To Kill in ‘79 or '80. Many good times had there.