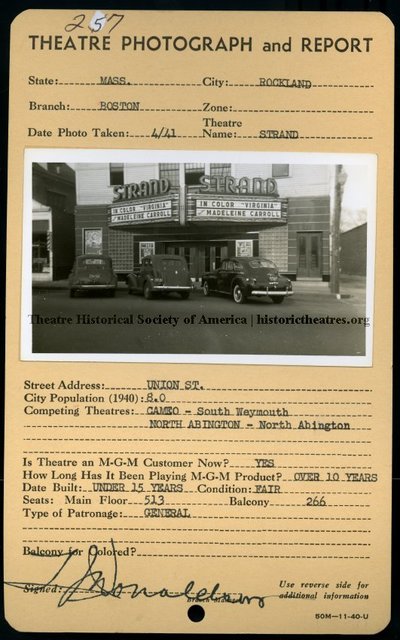 The Strand Theatre was downtown Rockland’s movie house for many years. It was opened by 1920 and later had a modernized entrance with a colorful marquee. There was a balcony inside. Rockland was, at the time, a small town about 20 miles south of Boston.

The Strand Theatre was destroyed by fire in September 1956.

I just looked the article Ron mentioned up, and at the end of the article it confirms that this theatre did indeed burn down. The article is here.

Thanks for posting the link, Phantom. The print version of the article which I read last Nov. was not as long as the on-line version, and did not actually name the Strand as being the theater which burned down. So this means the Strand lasted until Sept. 1956; I wonder if it was actually still open at that point.

Mike L. from Abington worked as a usher at the Strand in 1949-50. He says that after the fire in 1956, the burned-out theater was demolished.

I have heard that the street address for the Strand was 207 Union Street. I don’t know how accurate that is.

Mike L. from Abington told me that when he left Massachusetts in 1954, the Strand was still operating. He’s not sure if it was still open when it was destroyed by fire in 1956; it may have been. When he started working at the Strand when he was about 12 years old, the weekly poster cards were produced locally. Lloyd the mgr, driving his big Packard, would go around to all the locations where they were allowed to display the posters. Mike would run inside each store, remove the old poster and set up the new one. From the driver’s seat, Lloyd would give him the “thumbs up” when he set the new poster up correctly. This was in the 1940s.

I grew up in Rockland, moved there from Cambridge about 1955. Today I was watching “Tarantuala” on Turner Classic Movies and thought about the Rockland Theater and remembered seeing that movie at the Strand. Does anyone remember what the last movie to be shown before the fire was?? Tarantula must have been one of the last.

The Strand in Rockland was in operation by 1920. The report of the Massachusetts District Police published January, 1920, listed the Strand Theatre, Rockland, in good condition. The licensee was named Lee A. Rhodenzier. The January 23, 1923, issue of The Film Daily had this item:

“The Manchester Amusement Co., a subsidiary [of New England Theaters] has sold the Strand, Rockland, Mass., to L. A. Rhodenizer, the theater’s former manager.”

Contracts had been let for construction of a small movie theater in Rockland in 1915, according to the May 29 issue of The American Contractor. The two-story building was only 34x56 feet, though, which would have been too small for the Strand’s 779 seats, but it might have been expanded later, so it could have been the Strand.

To answer sargee7. I am quite sure the last movie to play at the Strand was Moby Dick starring Gregory Peck. I planned to see it but the theater burned down before I had the chance. I remember the fire quite well. I was nine years old and my father and I went down to watch the fire. We stood quite a bit away, though as the wind was carrying some cinders. We lived at the corner of East Water and Howard Streeets. My father, being a physician, thought he might help, but fortunately, no one was in the theater. I have fond memories of going to the Saturday matinees with the other Rockland kids. Cartoons, serials, previews and two feature films for 25 cents. By the time we came out our eyes were a mess and we kids would bump into each other for a few minutes.

Just to confirm what some of you are talking about, the Strand did burn down in 1956. Sadly, one firefighter lost his life to a heart attack that night. Moby Dick was playing that day, along with, ironically, The Day The World Ended! We really missed that theater after it burned. It was a long walk along old North Union street (Before the Airbase took it) to the Cameo in South Weymouth. I still have the original newspaper report on the Strand fire. I will try to find it for all of you when time allows.

Hello again. I have finally found the newspaper article that describes the Rockland Strand fire. It was an $80,000 fire on a Monday night that started just after 10PM, and forced 40 patrons out of the building. Theater manager Bernard Watts thought the fire was caused by a defective heater. It was a General alarm fire fought by five departments, and was finally brought under control after 3 hours. I was mistaken about the two movies that were playing that day. One was Moby Dick, but the other was A Day Of Fury. Sorry about that. The firefighter who died that night had a heart attack after fighting the fire for three hours. He was just 43 years old.