Previously operated by: Brotman, M. B. & A 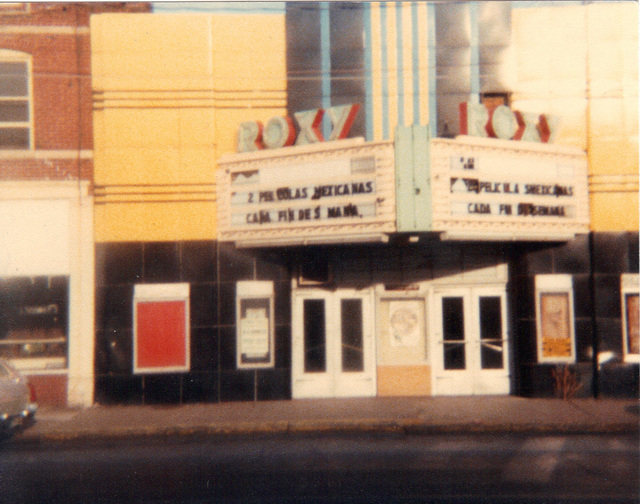 Opened as the Avoy Theatre on November 25, 1914. It was taken over by Michael Brotman in 1926. it closed on February 17, 1932 following a fire in the projection box. Reopened as the Roxy Theatre on January 6, 1934, still operated by the Brotman chain. It was later operated by an independent operators and went over to screening adult movies and was last operating as a Spanish language theatre. It was closed on April 2, 1978 and the theatre was demolished in 1984.

I remember watching many of the “beach” movies at the Roxy. Used to hop on my bike and pedal from our house on 2nd Street and 17th Ave to see the Saturday or Sunday matinee. It was a sad day when they closed and converted to adult flicks. After the adult years it became a theater for the Hispanic crowd for a few years before finally closing.

The Roxy stood on 15th street, which was one of the main throughways. I lived about three blocks away and had a paper route that took me close to the Roxy. The Roxy was about a block from the hill leading downtown (north). A short ways down the hill stood the Wellington Apartments; they’re still there, but probably under another name. The original Moline High School (later the original site of Black Hawk College) was nearby. Across the street and a bit north was a drug store with a soda fountain. A Schlegel’s drug store was a block or so south, where 15th and 16th streets forked (16th being the “main drag” of the two).

From the late 1950’s until it became an adult place, the Roxy got all of its movies after no other theaters wanted them. A movie would make two or three runs at different venues before ending up at the Roxy. I don’t remember them ever getting anything first. The theater was old and run down even in the early 1960’s. I delivered something there in 1970 and peeked inside. It wasn’t a pretty site, nor was it a place to take a deep breath in.

I would go here on Saturday afternoon with the two girls I was babysitting. This was about 1958. In 1960 I went to a movie there on a weekday afternoon. I don’t recall that it was second rate movies during this era. I think that came later. Does anyone remember the name of the diner on the corner? Would have been around 1960. I remember Wheelocks Drug Store across the street and the bank on the other corner, but can’t recall the name of the diner.

I am looking for the theatre I saw the Jungle Book in when it first released.. My family and I ate a dinner kitty corner to the theatre, before seeing the movie.. would like to know if the unnamed diner fits this location. We sat in a corner booth with a large picture window.. If this sounds like the right location and theatre I would love to know… Inside of theatre was somewhat Art Deco.. very high ceilings.. still trying to find the theatre I saw the Jungle Book in.. Any help would be useful… Thanks!! :)

The Avoy Theatre launched by the Shallberg Brothers on November 25, 1914 with D.W. Griffith’s “Though Shall Not Kill (aka “The Avenging Conscience).” In November of 1926, Micahel Brotman and Sons Circuit took on the venue later equipping it for sound. The theatre closed after a projection booth fire on February 17, 1932 ending its run under the Avoy moniker. Though the theatre was repaired by September of 1932, the Brotmans did not elect to reopen it at that time as the original lease lapsed.

However, Buster Brotman re-equipped and updated the theatre as the Roxy Theatre on a new lease relaunching on January 6, 1934 with “College Humor” starring Bing Crosby. The theatre closed after ownership changes after showings of “el Analfabeto” and “el Halcon Blanco” on April 2, 1978.