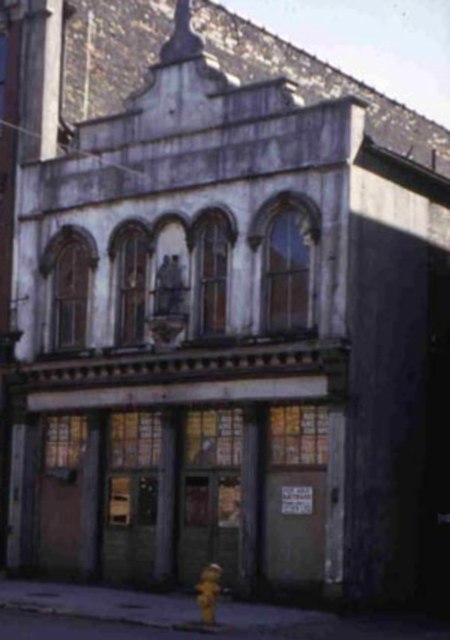 Built as the Marble Hall in 1850, it was converted into the Riverside Theatorium in 1909 using the second floor. It was remodeled into a in 1912 to the plans of architect F. Manson Gilbert. The Ohio Theater opened on the first floor of the building in 1929. Seating was listed at 800. The Ohio Theater was forced to close in 1937 due to the floods of the Ohio River. The Marble Hall building remained closed and boarded up for sometime following the floods and has since been demolished. Where the Ohio Theater once stood is now a plaza in front of new modern buildings.

Here are some then and now photos:
http://tinyurl.com/kokh2

Historic Evansville says that Marble Hall was built in the early 1850s, and before it became the Ohio Theatre it had also operated as a movie house called the Riverside Theatorium. This house was mentioned in the January 14, 1911, issue of The Moving Picture World:

“The Riverside Theatorium, although a small house, is known as the house with the ‘Mirror Screen’ and is running first-class independent films. Mr. W. Huddy, the proprietor of the Theatorium, has started to renovate his house, and his plans are to follow the advice of our Construction Page by using somber colors. Mr. Huddy hopes to secure a lease on the next building and, if successful, he will double his seating capacity”

The house was also mentioned in the March 8, 1910, issue of the Goshen Democrat: