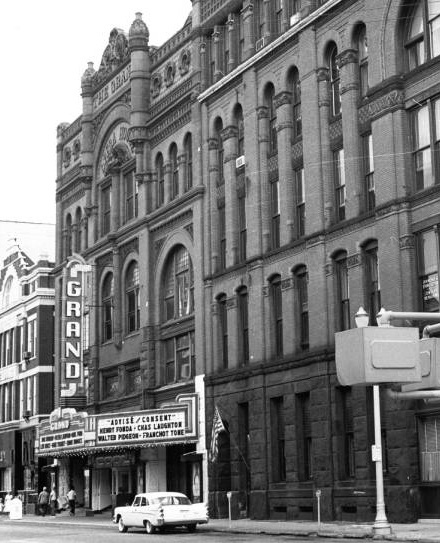 The Grand Theatre closed in 1962 and has since been demolished. The site is now a parking garage for Fifth Third Bank.

Evansville’s Grand Theatre opened as the Grand Opera House on October 17, 1889. The Romanesque Revival style building was designed by the firm of J.B. McElfatrick & Son, the leading theater architects of the period. The house originally seated 1,700. In its early years the Opera House hosted a variety of operas, stage plays, and civic events. From 1910 until 1922, the theater operated as part of the Orpheum circuit, presenting vaudeville and movies.

After a return to legitimate stage productions during the 1920s and the early 1930s, the Grand adopted a movie policy, though occasional live events were still presented. In January, 1940, a touring company presented the Broadway musical Golden Boy at the Grand, and this was the last major road show the house hosted. In 1958, grand opera returned to the Grand for one night, when the Wagner Opera Company presented their touring production of la Boheme on November 20. The last movies were shown in 1962.

Here is a page about the Grand Theatre (with several photos) from a web site about Evansville’s theaters.

Click on the “View all images” link on this page at Historic Evansville to see many additional photos of the Grand Theatre, most of them from its early years. Unfortunately there is only one interior shot, taken while the building was being demolished in 1962. 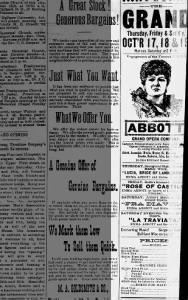