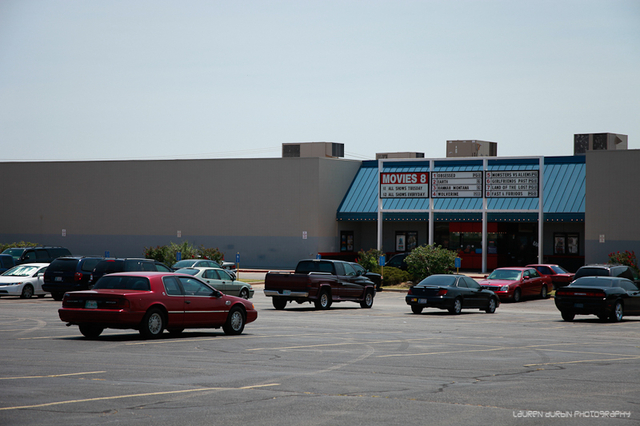 General Cinema Theatres opened the Crossroads Movies 8 on August 4, 1988. It was located on the outer lot of the Crossroads Mall just east of I35. The Crossroads featured first run attractions until Regal opened the new Crossroads Mall 16 with all stadium seating and all the amenities of a new modern megaplex. The Movies 8 was taken over by Hollywood Theatres, followed by Interstate Theatres. It became a discount house and was closed in 2005. It was reopened by Starplex Cinemas. It was closed September 25, 2015.

OPEN under Starplex Theatres. Saw it this weekend. Basically in the same parking lot as the equally ugly AMC Crossroads 16.

Color snapshots of the Crossroads Movies 8 can be seen on this site,
http://www.roadsideoklahoma.com/node/553

this theatre is open.

As of today, this theatre is not listed in AMC’s FAQ about the Starplex takeover, nor is the location listed on Starplex’s site.

Starplex didn’t renew their lease on the theatre a couple of years ago. I don’t know what transpired after Starplex left, but the closure wasn’t related to the AMC acquisition.

This opened on August 5th, 1988. Grand opening ad in the photo section.

General Cinemas launched its General Cinema Crossroads 8 as an outparcel building on the Southeast section of the expansive Crossroads Mall which had opened theatre-less in 1974. The project was announced in March of 1987 with the plans by The Architects Group of Mobile Alabama or TAG. Those plans were based off of the prototype General Cinema Town East 5 in Dallas and the 8-plex version could be found all over the country where General Cinemas began adding 8-plexes in the late 1980s.

The theatre opened with 2,500 seats on August 4, 1988 with “A Fish Called Wanda,” “Batteries Not Included.” “Good Morning Vietnam,” “Fatal Attraction,” “Dirty Dancing,” and “An American Tail.” The theatre boasted of a million dollars in concession sales over an undisclosed period. But by the late 1990s, the multiplex world was ending and was being replaced by megaplexes.

Regal Cinemas announced its first stadium-seating 16-screen megaplex in 1997 to be located at the Crossroads Mall. GCC bailed on the Crossroads 8 as groundbreaking began for that project on August 14, 1997. It became the Hollywood Theatres' Crossroads 8 on August 15, 1997. Regal’s delayed Crossroads 16 finally launched on February 26, 1999 and the Crossroads 8 business dropped 70%. Hollywood closed down the multiplex on June 7, 2001 and everyone knew that the theatre would not make it even close to the end of its 30-year lease.

Or would it? The theatre staged on unlikely comeback when Dallas-based InterState Theatres repositioned it as a sub-run dollar house that became a hit with local moviegoers. It relaunched as Crossroads Movies 8 on March 15, 2002 with “Jimmy Neutron,” “Ocean’s 11,” and “Behind Enemy Lines.” It was two-year old InterState’s second location attempt after it had closed the discount Northpark Mall cinema.

Starplex Cinemas took on the InterState locations in 2007 with the venue becoming Starplex Cinemas Crossroads Movies 8. The Crossroads Mall went into free-fall collapse reaching greyfield status as it struggled to find new retailers after original 30-year leases holders sprinted away from the property. Outparcel retailers also began to bail and the area looked haggered.

In 2013, the mall was reconceptualized as Plaza Mayor at the Crossroads - a fitting name - as the Mall was at its own crossroad. There was too much square footage inside to keep the mall vibrant or, to some, safe. Best Buy closed as an outparcel location, Starplex closed up the 8-screen location. With discount movie theater moving closer to extinction, one might have thought that was it especially with AMC running the 16-screen Crossroads theater nearby. But the Crossroads Movies 8 soldiered on as a discount house renting digital equipment showing DCP versions of second-run features to remain marginally viable all the way to a September 25, 2015 closing. That was just two years shy of the theatre’s 30th anniversary and lease’s end. Josh and Marty Evans then took the rented equipment from the Crossroads to the Robinson Crossing 6.

The Mall was demolished after years of sitting virtually vacant in 2021 and the Crossroads Movies 8 sat graffiti-covered and bashed-in after years of vacancy awaiting the wrecking ball. It was a fate that took out a number other outparcel buidlings in 2021. But somehow the building was saved and remodeled no longer resembling the 8-screen theatre and looking pretty vibrant.