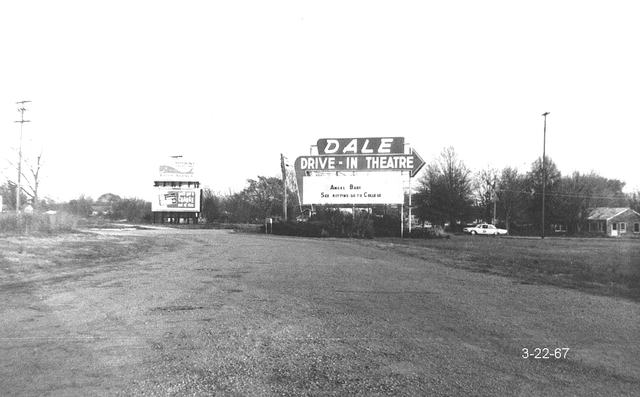 The Dale Drive-In opened on November 16, 1956, screening “The Sea Chase” starring John Wayne and Lana Turner. In October 1956, before the theatre opened, a contest was held to name the theatre. The winning entry would get $100.00 in cash, and the winner was Mrs. Valcus Cerpenter. It was owned by R.C. Cobb of Cobb Theatres. Everett Young was the manager. The parking ramps had a 650 car capacity, with a 115 foot wide CinemaScope screen tower and in-car speakers. It featured a children’s playground and cafeteria style concession stand. In 1964, Cobb Theatres leased their Skyline Drive-In, and on July 16, 1970, the Skyline Drive-In management were arrested for showing X-Rated movies to under-age minors.

On August 5, 1970, the Cobb Theatres chain discontinued showing X-Rated movies in all of their theatres in Tuscaloosa. These theatres included the Dale Drive-In, Skyline Drive-In, Tide I Theatre, Tide II Theatre and the Druid Theatre. A new box office was built at the Dale Drive-In and the concession stand was renovated for the reopening on May 26, 1978 for the summer season. Unfortunately the Dale Drive-In was closed for good in September of 1978 and it was demolished.

In 1980 with the construction of I-359 and the new interchange at 35th Street, along with new entrance and exit ramps, 35th Street was rerouted through the middle of the site of the old drive-in, so there is no trace of the Dale Drive-In left anymore.

Interesting note: The former manager has confessed that the ten minute clock on the screen between features actually ran for twenty minutes so that the management could sell more food at the snack bar.

Nameing contest: October 28th, 1955 copy of the News.
View link and move one page forward for the ad.

The map link above throws the location way off, (to 24th St; not Avenue) according to the print ad. Greensboro Ave is AKA 24th Ave., but I can’t find any mention of the Rosedale School mentioned in the ad. School has either been renamed, or demolished long ago. Anyone else know?

Dale Drive-In location seems to be all commercial buildings now, or the Sahama Village Cir. Somewhere near this intersection.

I have done a complete upgrade to the Tuscaloosa movie theatres and uploaded it at View link 10 grand opening ads are found.

The above address will map to the location of the drive-in, which was demolished for the construction of 35th Street, which goes straight through what used to be the concession stand and the screen tower.

Here is a 1966 aerial photo of the drive-in, courtesy of Earth Explorer and USGS:

Uploaded the day before grand opening ad from Nov 15, 1956