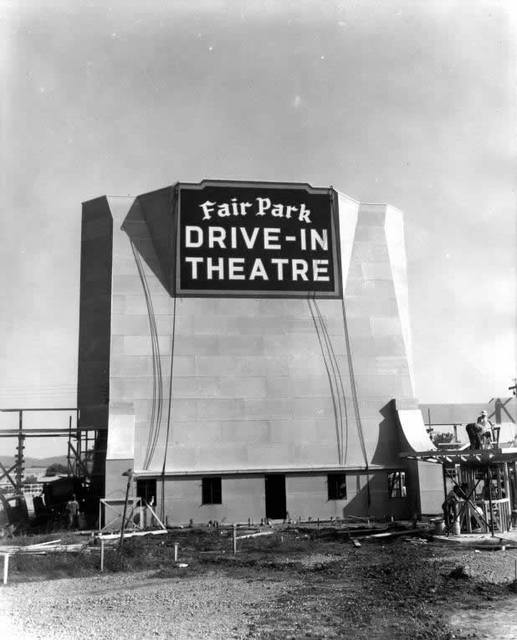 This popular drive-in opened on October 2, 1948 with Maria Montez in “Pirates of Monterey”. It had space for 650 cars. It was operated by Walters Theatres. The screen was destroyed by a tornado in 1967. The property is currently occupied by a post office and police station.

I remember the Fairpark as a small child in the 1960’s. The screen was rebuilt after the 67 tornado and remained active until the mid 70’s. It was a terrible place to watch a drive in movie on Saturday Night in the summer. It sat next to the Alabama State Fairgrounds where there was (and remains) an auto racing track. The cars were so loud that they drowned out the speakers. Our family lived in WestEnd near where this was located, but preferred other drive-in venues in quieter parts of the city such as the Mustang in Centerpoint which also had a playground for us to play on till the movie started.

The Mustang remained functional until the late 1970’s. A Bruno’s Supermarket is now on the site where the Mustang once stood in Centerpoint. Can someone tell me some other Drive-ins in Birmingham? I remember that there was one near the late Eastwood mall next to the Motel Birmingham (or whatever that still in business motel is today). There was a drive-in in Fultondale; and one in the Pelham area around Cahaba Valley Road area of Hwy 31. Was there also one on or near Hwy 150 in Hoover or am I confusing it with the one near Cahaba Valley? One in Alabaster and one between Tarrant and Pinson called the Robinwood. It too closed in the mid- late 70’s as I recall. There was one in Midfield and I think it was later converted to a twin and remained functional until around 1980. I know there was one between Fairfield and Hueytown, but I think it was a XXX Drive In. It’s screen face away from the road.
The last I remember, the remnants of the sign at this one was still standing at its Warrior River Road site.

In 1956 it parked 650 cars and was owned by N.H. Waters Circuit,which ran Every Drive-in in that city.

This was expected to open on September 30th, 1948 but did not open until October 2nd after bad weather. Grand opening ads posted.

Opened with a colour cartoon(not named) and “Pirates of Monterey”.