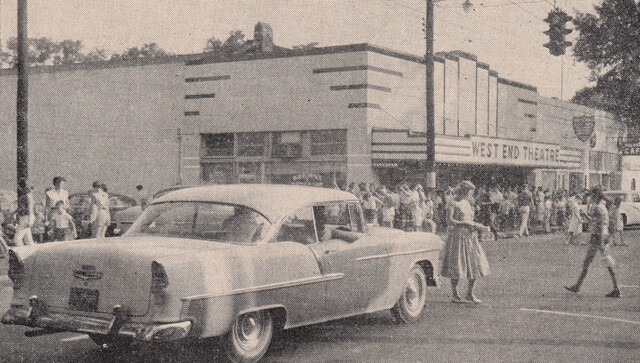 The West End Theatre opened prior to 1928 with seating listed at 700. The theatre closed around 1964 and has since been demolished.

The West End Theater was open as late as 1958 and was located on the SW corner of 13th and Tuscaloosa Ave. After closing the next door tenant, Spivey’s, expanded into the space. On the NW corner was Donna Jean’s Candy Store – the theater didn’t have a snack bar so you had to bring your own. To further complicate the situation, for popcorn you went to Alley’s Drug Store on the NE corner where an older lady had a popcorn machine.

The building formerly housing the theater burned several years ago.

FTR, I grew up in West End. The theater was still opened until the mid 60’s. I worked in the ticket booth on many weekends while I was in the 8th grade. After the show started, I worked behind the refreshment counter. I was also in the Miss West End contest held there when I was in the 8th grade 64-65. After that it became Spivey Hobby and Toy which was already next door to the theater and needed to expand.