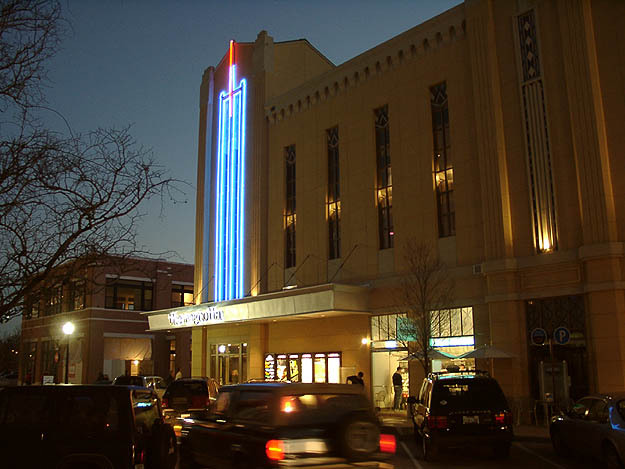 Located on the corner of McKinney Avenue and Lemmon Avenue, the Magnolia Theater was opened in January 2002 and has been operated by Landmark Theatres since 2003. It was closed on March 16, 2020 due to the Covid-19 pandemic and Landmark decided not to reopen the theatre. It was taken over by Violet Crown Circuit of Austin, TX, who plan for a 2022 reopening. While closed renovations are being carried out.

Here is a blurb from Dallas.com:

In Uptown Dallas' West Village, the popular Magnolia Theater has a modern and streamlined art deco look and is an upscale version of a movie theater with luxe concession stands and a bar in the lobby. Screening only the most “sophisticated and intelligent” cinema, the Magnolia Theater has a knowledgable staff by employing local Dallas film-philes. One special perk, with the purchase of 2 regular movie tickets, visitors can drink a $10 bottle of wine in the theater.

Movies of the projection booth can be found at this link:
View link

did anyone attend the AFI Dallas filmfest at this location? Thoughts?

In 1998 and 1999, announcements that two new-build art theaters were coming to town in the Landmark West Village and the Angelika – Dallas at Mockingbird Station. Dallas had never had a new-build art cinema – though many converted spaces such as the UA Ciné and Silver Cinema’s Inwood Theater both of which were operating at the time of these announcements. This was exiciting despite the fact that the projects fell months and months behind schedule.

At the Landmark West Village, Landmark’s bankruptcy forced the project to stall out and was endangered. The Angelika Dallas at Mockingbird Station was delayed by bad weather but won the race with a grand opening on August 3, 2001. A week later, Magnolia Pictures – just founded then by Bill Banowsky and John Sughrue – would take on the moribund West Village theater project calling it The Magnolia. They would have an outlet for their own film releases and program other art and repertory films. Beck Group – known for many Cinemark theaters through the years – both architected and constructed the theater.

The Magnolia had its grand opening in January of 2002. The swanky second-floor bar well fit the West Village complex in which it was situated providing a revenue stream for the independent theater. It also had one DLP projector for digital screenings – one of only two DFW theaters to boast that technology at that time. This added flexibility to programatic options. And the fledgling circuit would add a second theater to its portfolio in Boulder, Colorado. Todd Wagner and Mark Cuban would found 2929 Pictures and in 2002 invested in Magnolia Pictures. Oaktree Capital took on the cash strapped Silver Cinema circuit allowing for $65,000 refurbishing of the Inwood and it competed with The Magnolia for runner-up arthouse destination to the Angelika’s supremacy.

In 2005, the theater circuit was first to try “day and date” releases with films opening simultaneously on the Internet and in limited releases in theaters. It would mix in major mainstream releases especially in the summer to draw audiences. In October of 2012, it would gravitate to digital projection in all five theaters with upgraded digital sound. Also new leather-style seats with expanded row widths and leg room along with new carpet and flooring, wall coverings, and expanded gourmet concessions items at the snack bar. As of the mid-2010s, the theater had aged very well remaining a popular spot within Uptown Dallas.

The Magnolia Theatre closed on March 16, 2020 due to the COVID-19 pandemic. Landmark decided not to reopen the venue. Violent Crown Circuit of Austin adopted the Magnolia with renovation plans and a targeted Spring 2022 reopening date. The head of Violent Crown also was a founder of Magnolia Pictures.