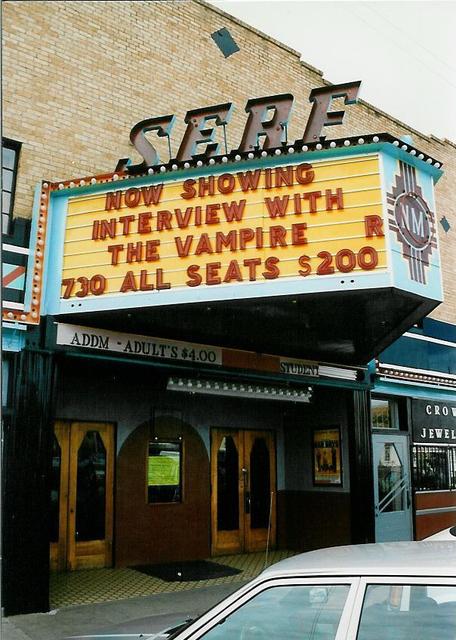 It was reopened December 20, 2014 as the Serf Theatre Hall, presenting concerts and live performances.

The Serf (I always wondered how it got that name)as it appeared in 1995:
View link

The October 9, 1937, issue of Boxoffice Magazine said that the Graham Brothers Theatre Supply Company of Denver had shipped various items to the new Serf Theatre in Las Vegas, New Mexico. These included 500 seats, 340 yards of carpeting, two blowers and motors, two curtains with tracks and controls, a sound screen, and complete booth equipment.

The Maloof Bros. were apparently the owners of the building, but the house was operated by Fox Intermountain Theatres when it opened, according to the October 23, 1937, issue of Boxoffice.

The remodeled lobby featured a wagon wheel chandelier with six brass lanterns, and the walls were decorated with murals depicting the Santa Fe Trail. The auditorium was painted in shades of aqua and turquoise, and the screen had a turquoise velvet curtain.

Checking the 1937 Boxoffice article again, I think it says that 800 chairs were shipped to the Serf Theatre. The scan is very blurry, but the Google cache in plain text says 800. The 1950 reseating thus probably reduced the total capacity to 726, rather than increasing it.

At least 72 films were filmed in Las Vegas, NM to date. I just spotted the theater in Red Dawn.

Here is another photo:
http://tinyurl.com/y93v2gl

The Theatre name was the intials of my Great Uncles children – Sara, Eddie, Richard, and Fannie. There was also a SERF hotel nearby that was torn down in the 80’s…

12/2014 The theatre has reopened after a renovation and is now know as the “Serf Theatre Hall”. From the Facebook page, it appears that the auditorium has been floored over and is used as a dance hall. The stage looks intact. Good to see the space open for business and hoping that it will continue to promote live performances.

Wow! $200 per seat – seems a bit steep! How does one abbreviate ‘admission or adm’ as addm? Sad. A suggestion? REPLACE THE YELLOWED PLEXIGLASS! WOLVERINES!!!

Boxoffice, June 17, 1974: “Kuaid Quadri has taken over operation of the Serf Theatre, Las Vegas, N.M., from the former operators.”